U.S. regulators on Friday approved a fast-acting, super-potent opioid tablet as an alternative to IV painkillers used in hospitals.

The decision by the Food and Drug Administration came over objections from critics who fear the pill will be abused. In a lengthy statement, FDA Commissioner Scott Gottlieb said there will be “very tight restrictions” placed on its distribution and it is intended only for supervised settings like hospitals.

The tiny pill was developed as an option for patients who pose difficulties for the use of IVs, including soldiers on the battlefield. The pill from AcelRx Pharmaceuticals contains the same decades-old painkiller often given in IV form or injection to surgical patients and women in labor.

Gottlieb noted the pill was a high priority for the Department of Defense, which helped fund testing, because it wanted a way to provide fast pain relief to injured soldiers. The tablet, placed under the tongue with a dispenser, starts reducing pain in 15 to 30 minutes.

A panel of FDA advisers had earlier voted 10-3 in favor of the pill called Dsuvia (duh-SOO’-vee-uh). But in a rare response, the panel’s chairman joined critics in urging the FDA to reject it. The chairman, Dr. Raeford E. Brown Jr., who couldn’t attend the meeting and didn’t cast a vote, predicts that the pill will be abused inside and outside medical settings and cause overdose deaths.

The pills contain sufentanil, a chemical cousin of the opioid fentanyl. 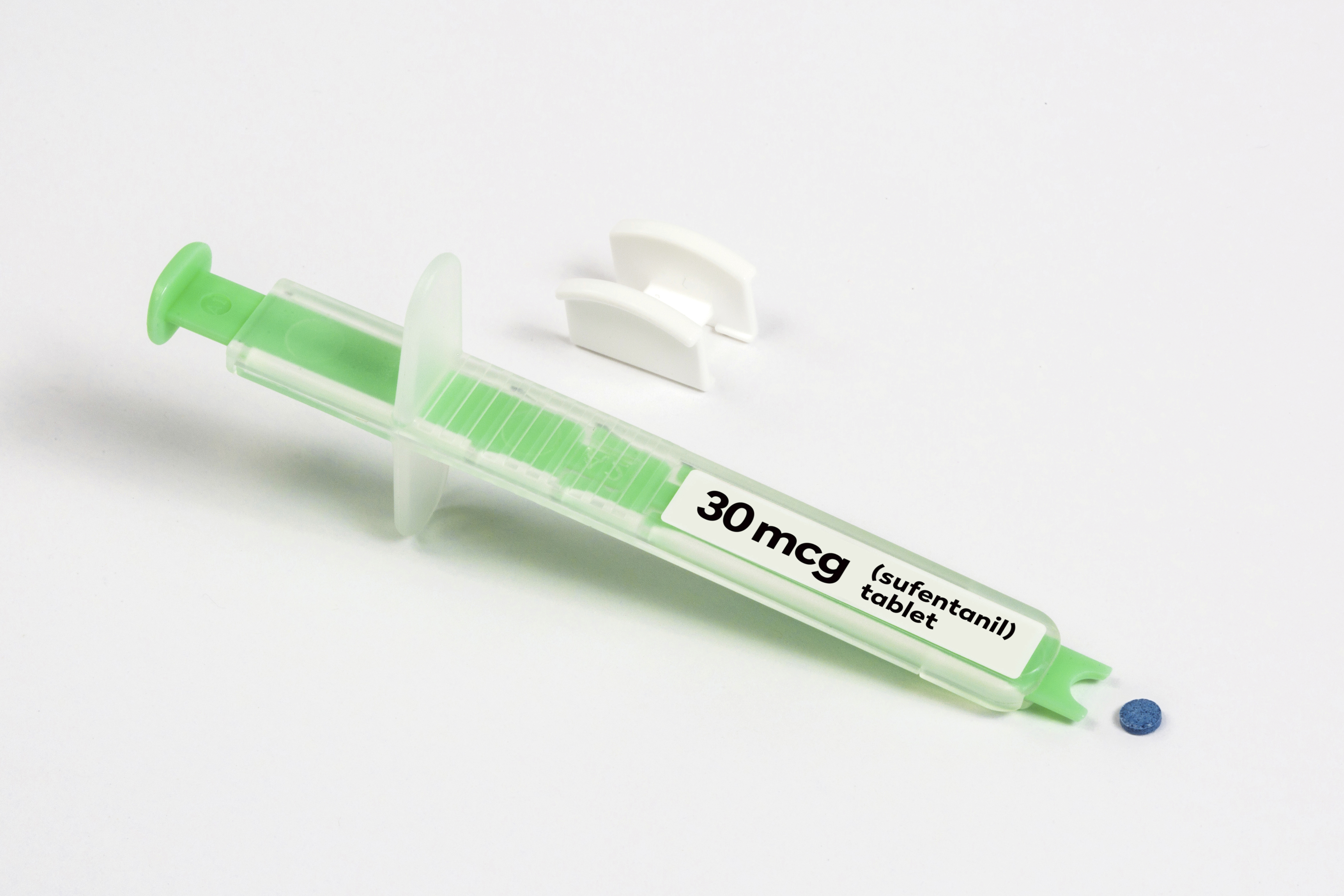 This undated image provided by AcelRx Pharmaceuticals shows the dispenser and a tablet for the company’s medication Dsuvia. On Friday, Nov. 2. 2018, U.S. regulators announced the approval of the fast-acting, super-potent opioid tablet as an alternative to IV painkillers used in hospitals. (Craig Sherod Photography/AcelRx Pharmaceuticals via AP)

Gottlieb said the drug will carry a boxed warning and won’t be available at drugstores for patients to take home. Acknowledging the criticism, he said he’s asked FDA staff to “evaluate a new framework” for the approval of new opioid drugs that will clearly outline how the agency considers benefits and risks.

“We won’t sidestep what I believe is the real underlying source of discontent among the critics of this approval — the question of whether or not America needs another powerful opioid while in the throes of a massive crisis of addiction,” Gottlieb’s wrote.

“It’s a huge mistake,” Wolfe said. “This drug is doomed. It’s dangerous and it will kill people.”

The Redwood City, California-based company expects the pill to be available early next year at a price of $50 to $60 per pill.

In one study, the pill provided about the same pain relief to patients as IV morphine. Common side effects with Dsuvia included nausea, vomiting, constipation and decreased blood oxygen levels. Those occurred slightly more often with the pill than for study participants given morphine.