Brazilian doctors are reporting the world’s first baby born to a woman with a uterus transplanted from a deceased donor.

Eleven previous births have used a transplanted womb but from a living donor, usually a relative or friend.

Experts said using uteruses from women who have died could make more transplants possible. Ten previous attempts using deceased donors in the Czech Republic, Turkey and the U.S. have failed.

The baby girl was delivered last December by a woman born without a uterus because of a rare syndrome. The woman — a 32-year-old psychologist — was initially apprehensive about the transplant, said Dr. Dani Ejzenberg, the transplant team’s lead doctor at the University of Sao Paulo School of Medicine. 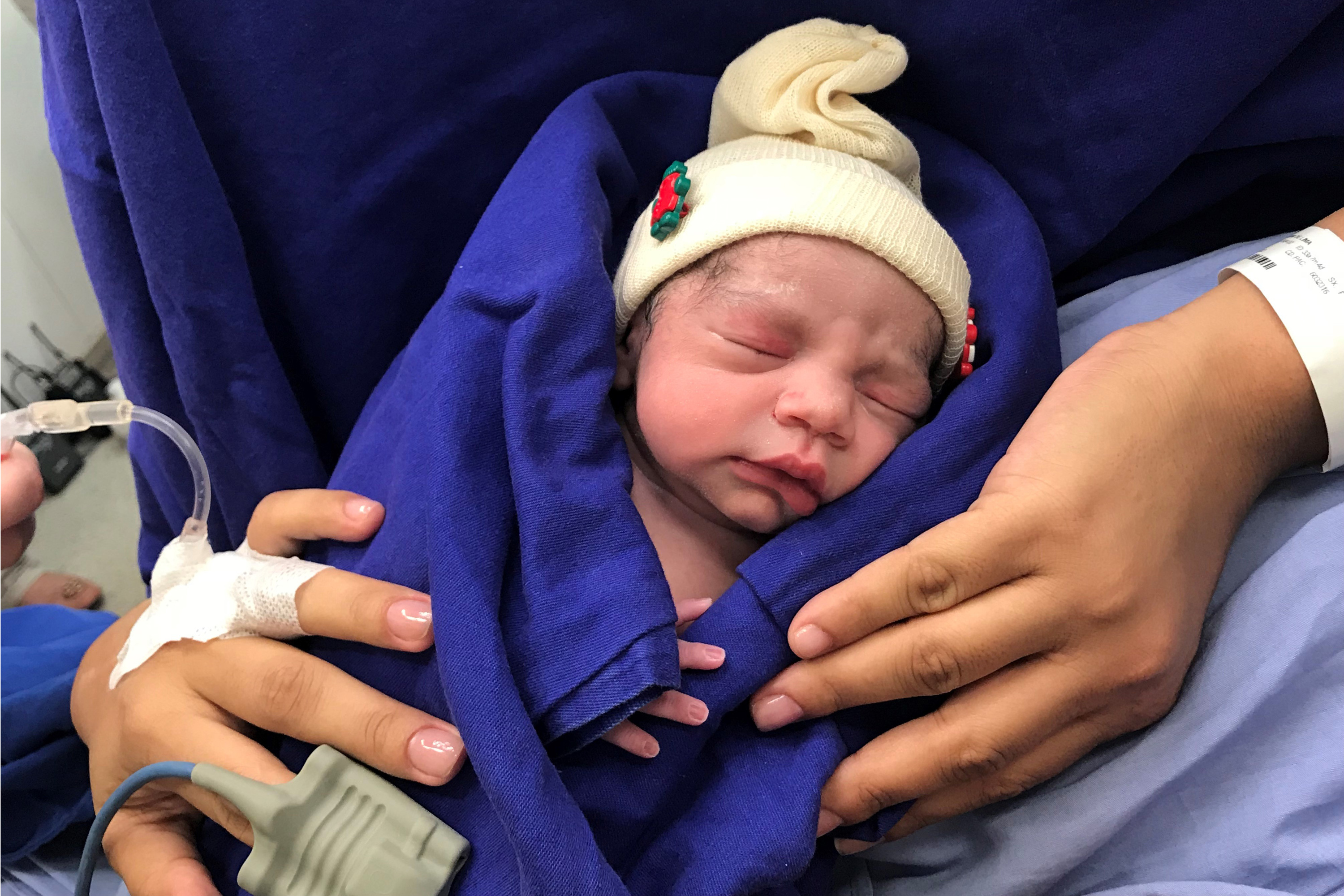 This Dec. 15, 2017 photo provided by transplant surgeon Dr. Wellington Andraus shows the baby girl born to a woman with a uterus transplanted from a deceased donor at the Hospital das Clinicas of the University of Sao Paulo School of Medicine, Sao Paulo, Brazil, on the day of her birth. Nearly a year later, mother and baby are both healthy. (Courtesy Dr. Wellington Andraus via AP)

“This was the most important thing in her life,” he said. “Now she comes in to show us the baby and she is so happy,”

The woman became pregnant through in vitro fertilization seven months after the transplant. The donor was a 45-year-old woman who had three children and died of a stroke.

The recipient, who was not identified, gave birth by cesarean section. Doctors also removed the womb, partly so the woman would no longer have to take anti-rejection medicines. Nearly a year later, mother and baby are both healthy.

Two more transplants are planned as part of the Brazilian study. Details of the first case were published Tuesday in the medical journal Lancet.

Uterus transplantation was pioneered by Swedish doctor Mats Brannstrom, who has delivered eight children from women who got wombs from family members or friends. Two babies have been born at Baylor University Medical Center in Texas and one in Serbia, also from transplants from living donors.

In 2016, doctors at the Cleveland Clinic transplanted a uterus from a deceased donor, but it failed after an infection developed.

“The Brazilian group has proven that using deceased donors is a viable option,” said the clinic’s Dr. Tommaso Falcone, who was involved in the Ohio case. “It may give us a bigger supply of organs than we thought were possible.” 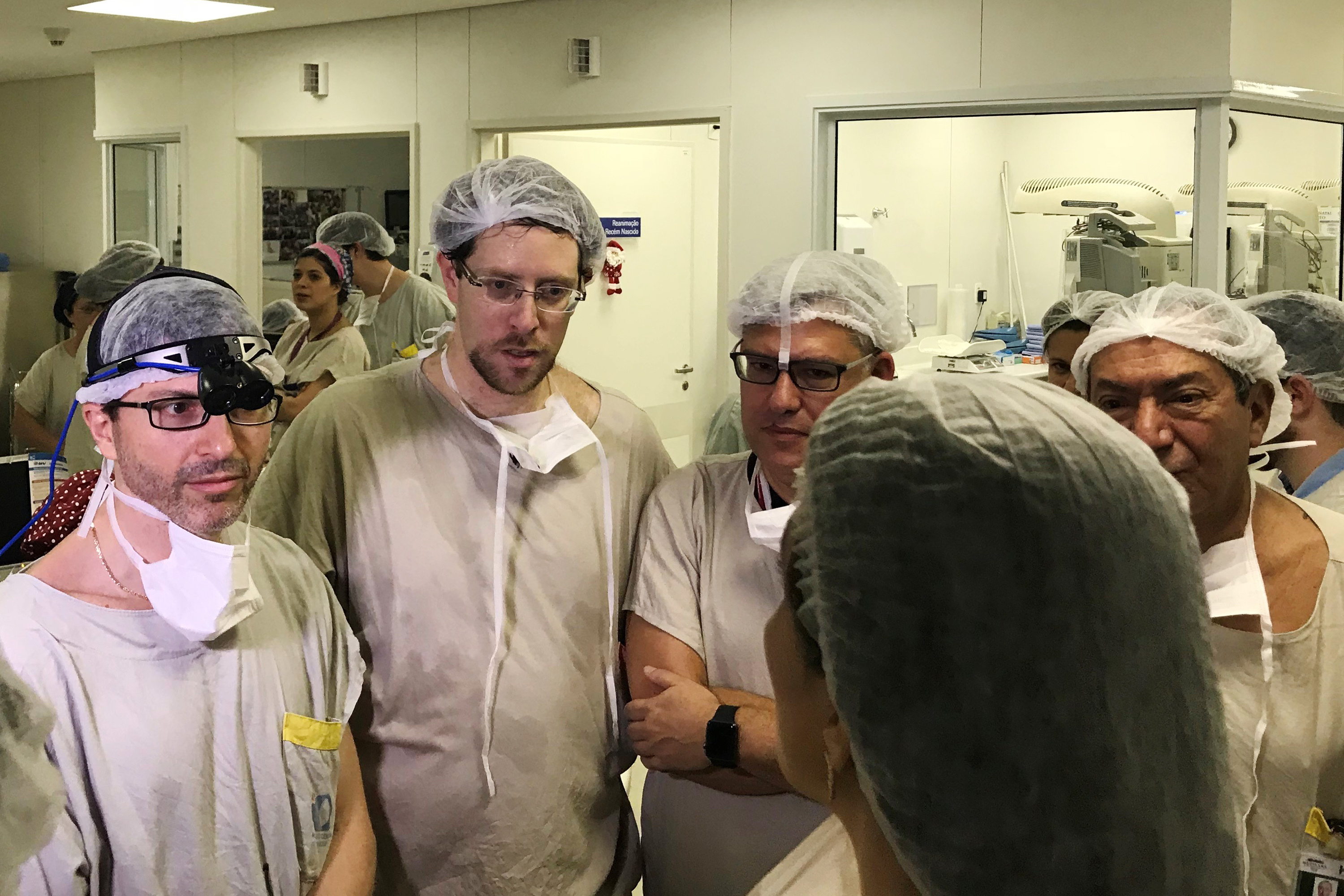 In this Dec. 15, 2017 photo provided by transplant surgeon Dr. Wellington Andraus, left with magnifying glasses, he and Dr. Dani Ejzenberg, second left, confer with colleagues at the Hospital das Clinicas of the University of Sao Paulo School of Medicine, Sao Paulo, Brazil, on the day of the birth of the baby girl born to a woman with a uterus transplanted from a deceased donor. Nearly a year later, mother and baby are both healthy. (Courtesy Dr. Wellington Andraus via AP)

The Cleveland program is continuing to use deceased donors. Falcone said the fact that the transplant was successful after the uterus was preserved in ice for nearly eight hours demonstrated how resilient the uterus is. Doctors try to keep the time an organ is without blood flow to a minimum.

Other experts said the knowledge gained from such procedures might also solve some lingering mysteries about pregnancies.

“There are still lots of things we don’t understand about pregnancies, like how embryos implant,” said Dr. Cesar Diaz, who co-authored an accompanying commentary in the journal. “These transplants will help us understand implantation and every stage of pregnancy.”