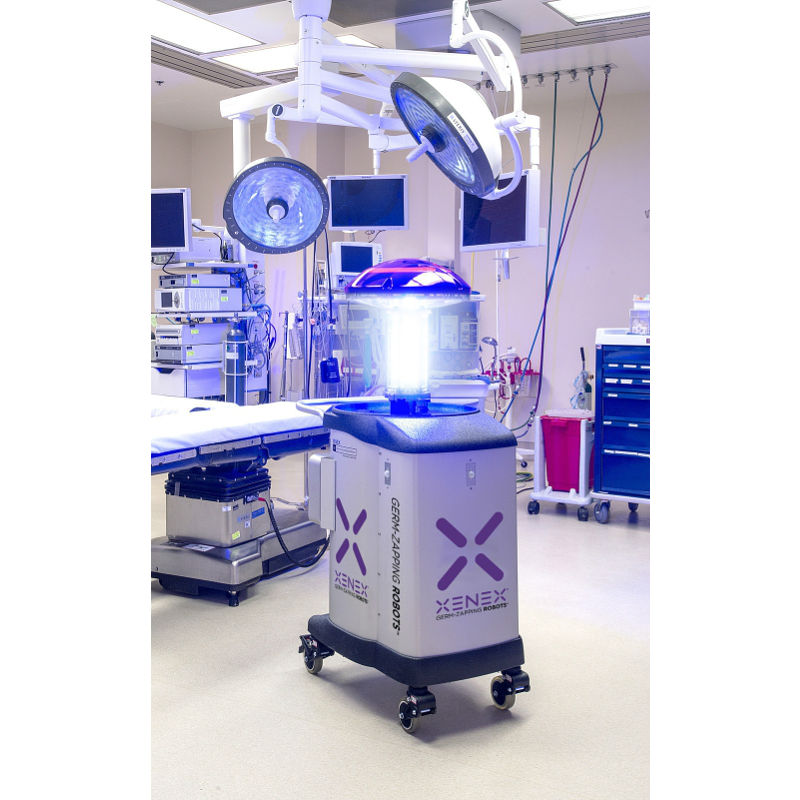 Surgical Site Infections (SSIs) are devastating for patients and pose a significant financial risk for hospitals. Surgical Site Infections resulting from total knee or hip procedures cause excruciating pain and suffering, have a three percent mortality rate and are associated with an additional $21,000 in additional care costs per infection. As hospitals worldwide struggle to prevent infections, Alabama-based Trinity Medical Center experienced a 100 percent decrease in Surgical Site Infection rates in its orthopedic Operating Rooms (ORs) after implementing a total joint infection control bundle that includes Xenex Germ-Zapping Robots to disinfect its ORs and patient rooms.

Surgical site infections decreased 100 percent at Trinity Medical Center after the facility implemented an infection control bundle that included Xenex germ-zapping robots for room disinfection. This is the sixth peer-reviewed study published by a facility that experienced a decrease in hospital acquired infections after it began using Xenex pulsed xenon UV light technology to destroy microorganisms like C.diff and MRSA.

In the peer-reviewed study “Influence of a total joint infection control bundle on surgical site infection rates” in the American Journal of Infection Control (AJIC), the authors describe the measures they took to achieve a 100 percent reduction in Surgical Site Infection rates. The AJIC study states that the intervention may have prevented seven infections, averted one death, and saved $290,990 over the 12 months studied. This is the sixth peer-reviewed study published by a hospital that experienced a decrease in Hospital Acquired Infection (HAI) rates after it began using the Xenex pulsed xenon Full Spectrum ultraviolet (UV) room disinfection system to destroy the microorganisms that cause HAIs.

Multiple studies have shown that significant environmental contamination exists in hospital rooms, even after manual cleaning has taken place. Germs and bacteria like Clostridium difficile (C.diff) and methicillin resistant Staphylococcus aureus (MRSA) can live on surfaces for months. To reduce the bacterial load in its orthopedic wing, Trinity began disinfecting its operating rooms (ORs) nightly using pulsed xenon UV disinfection. The Xenex device was operated for 5-10 minutes in multiple positions in each OR. Upon patient discharge, patient rooms were cleaned and then disinfected using the Xenex device. Compliance with the Xenex disinfection protocol was monitored using the robot’s onboard data log, which communicates with a cloud-based portal where usage data is stored. The use of pulsed xenon UV disinfection was combined with quality improvement initiatives described in the paper.

Trinity Medical Center moved in October 2015 to a new facility in Birmingham, Grandview Medical Center, where they continue to use Xenex for room disinfection.

“This 100 percent reduction in infections is good news for patients in Birmingham. No one should go to the hospital for a procedure or treatment and unknowingly contract a painful and potentially lethal infection. Surgeons should want to operate at Grandview Medical Center because they are doing more to keep their patients safe by eliminating the pathogens that could endanger them,” said Morris Miller, CEO of Xenex. “Trinity becomes the sixth hospital to publish a peer-reviewed outcome study showing a decrease in infection rates after using the Xenex Germ-Zapping Robot for room disinfection. I hope that other hospitals are watching closely because Xenex offers the only UV disinfection technology shown, in multiple peer reviewed published outcome studies, to effectively reduce HAI rates.”