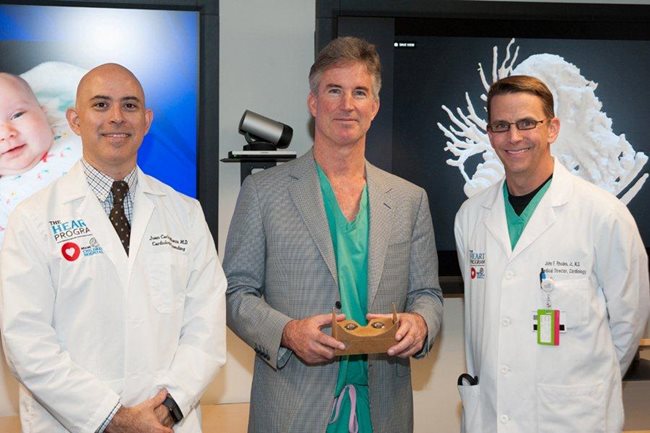 A four-month old baby deemed inoperable after her birth in Minnesota is preparing to celebrate her first Christmas with her family in Miami after a life-saving heart surgery at Nicklaus Children’s Hospital, made possible with the aid of virtual-reality imaging.

Teegan Lexcen, one of twins born August 20 to Cassidy and Chad Lexcen of Chaska, Minnesota (a suburb of the twin cities), was judged by physicians to be inoperable within 24 hours of her birth. With only one lung and a heart riddled with defects, she was sent home with her thriving identical twin Riley so that the family could spend together what little time Teegan might have.

“We lived thinking that any time she went to sleep, she might not wake up again,” recalls Cassidy, mother of four. “And we did everything we could to make sure she never cried, because we were afraid the strain might be too much for her struggling heart.”

Though Teegan grew only a few pounds during her first three months, a stark contrast to her healthy twin sister, the critically ill baby stunned her family and pediatrician with each day she survived. Her will to live spurred her family to search for a miracle.

The list of congenital heart defects was overwhelming: Hypoplastic left heart (a rare defect in which the left heart is severely underdeveloped) hypoplastic aortic arch (blockage of the main conduit of blood from the heart) double outlet right ventricle, mitral atresia, ventricular septal defect, and abnormal pulmonary veins draining to coronary sinus. She had no left lung and no left pulmonary artery. The absence of a left lung caused Teegan’s heart to be displaced into her left chest, making it challenging to plan her one-of-a-kind heart repair.

Dr. Redmond Burke, Director of Cardiovascular Surgery for The Heart Program and Dr. Juan Carlos Muniz, Director of Cardiac MRI, reviewed the child’s CT scan data. A novel operation was devised using virtual reality imaging techniques including Google Cardboard, which turns a smartphone into a low-cost stereoscopic virtual reality viewer. The CT scan data was converted into a 3-dimensional model using Materialise software. Sketchfab was used to upload to the web, where it was converted to a format compatible with the Google Cardboard Viewer. 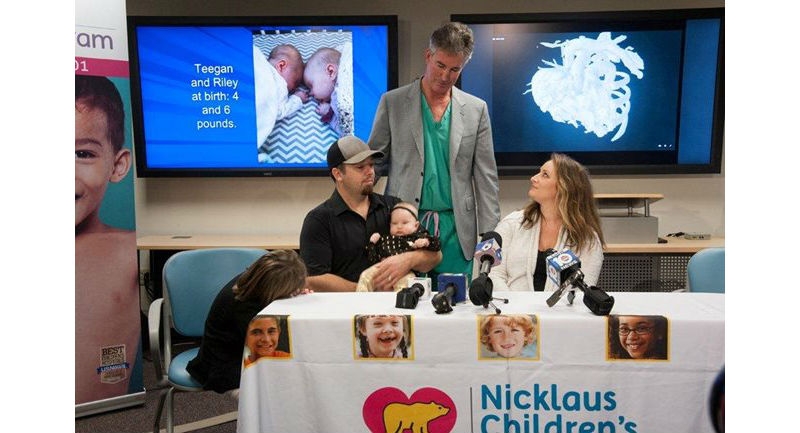 Dr. Burke with Cassidy and Chad Lexcen, parents of twins Teegan and Riley, as well as Harper, 6 and Asher, 3.

On December 10, Dr. Burke performed a seven-hour open-heart surgery, rebuilding Teegan’s aorta with donated human heart tissue, connecting her aorta and pulmonary artery, and placing a shunt from the right ventricle to her only pulmonary artery.

Teegan’s first night after surgery was difficult. She underwent emergent catheterization the next morning, and arrested during the procedure. The procedure showed that her operation was working, but her heart and lung were still too weak. She was emergently placed back on heart-lung bypass for the next three days. Teegan just needed time to rest until her heart and lung were strong enough to function on their own again.

Teegan will need to have two more operations in the months and years ahead, a process typical of children born with hypoplastic left heart syndrome. She will spend Christmas in Miami with her entire family nearby, thanks to her parents who would not give up on her, a can-do surgical team and novel virtual reality technology. Teegan will be heading home to Minnesota in the next few weeks, eventually returning for her subsequent surgeries. In the meantime, it’s a Christmas miracle in Miami for Chad and Cassidy Lexcen and all of their children.