In experiments involving a simulation of the human esophagus and stomach, researchers at MIT, the University of Sheffield, and the Tokyo Institute of Technology have demonstrated a tiny origami robot that can unfold itself from a swallowed capsule and, steered by external magnetic fields, crawl across the stomach wall to remove a swallowed button battery or patch a wound.

The new work, which the researchers are presenting this week at the International Conference on Robotics and Automation, builds on a long sequence of papers on origami robots from the research group of Daniela Rus, the Andrew and Erna Viterbi Professor in MIT’s Department of Electrical Engineering and Computer Science.

“It’s really exciting to see our small origami robots doing something with potential important applications to health care,” says Rus, who also directs MIT’s Computer Science and Artificial Intelligence Laboratory (CSAIL). “For applications inside the body, we need a small, controllable, untethered robot system. It’s really difficult to control and place a robot inside the body if the robot is attached to a tether.”

Joining Rus on the paper are first author Shuhei Miyashita, who was a postdoc at CSAIL when the work was done and is now a lecturer in electronics at the University of York, in England; Steven Guitron, a graduate student in mechanical engineering; Shuguang Li, a CSAIL postdoc; Kazuhiro Yoshida of Tokyo Institute of Technology, who was visiting MIT on sabbatical when the work was done; and Dana Damian of the University of Sheffield, in England.

Although the new robot is a successor to one reported at the same conference last year, the design of its body is significantly different. Like its predecessor, it can propel itself using what’s called a “stick-slip” motion, in which its appendages stick to a surface through friction when it executes a move, but slip free again when its body flexes to change its weight distribution.

Also like its predecessor — and like several other origami robots from the Rus group — the new robot consists of two layers of structural material sandwiching a material that shrinks when heated. A pattern of slits in the outer layers determines how the robot will fold when the middle layer contracts.

Material Difference
The robot’s envisioned use also dictated a host of structural modifications. “Stick-slip only works when, one, the robot is small enough and, two, the robot is stiff enough,” says Guitron. “With the original Mylar design, it was much stiffer than the new design, which is based on a biocompatible material.”

To compensate for the biocompatible material’s relative malleability, the researchers had to come up with a design that required fewer slits. At the same time, the robot’s folds increase its stiffness along certain axes. 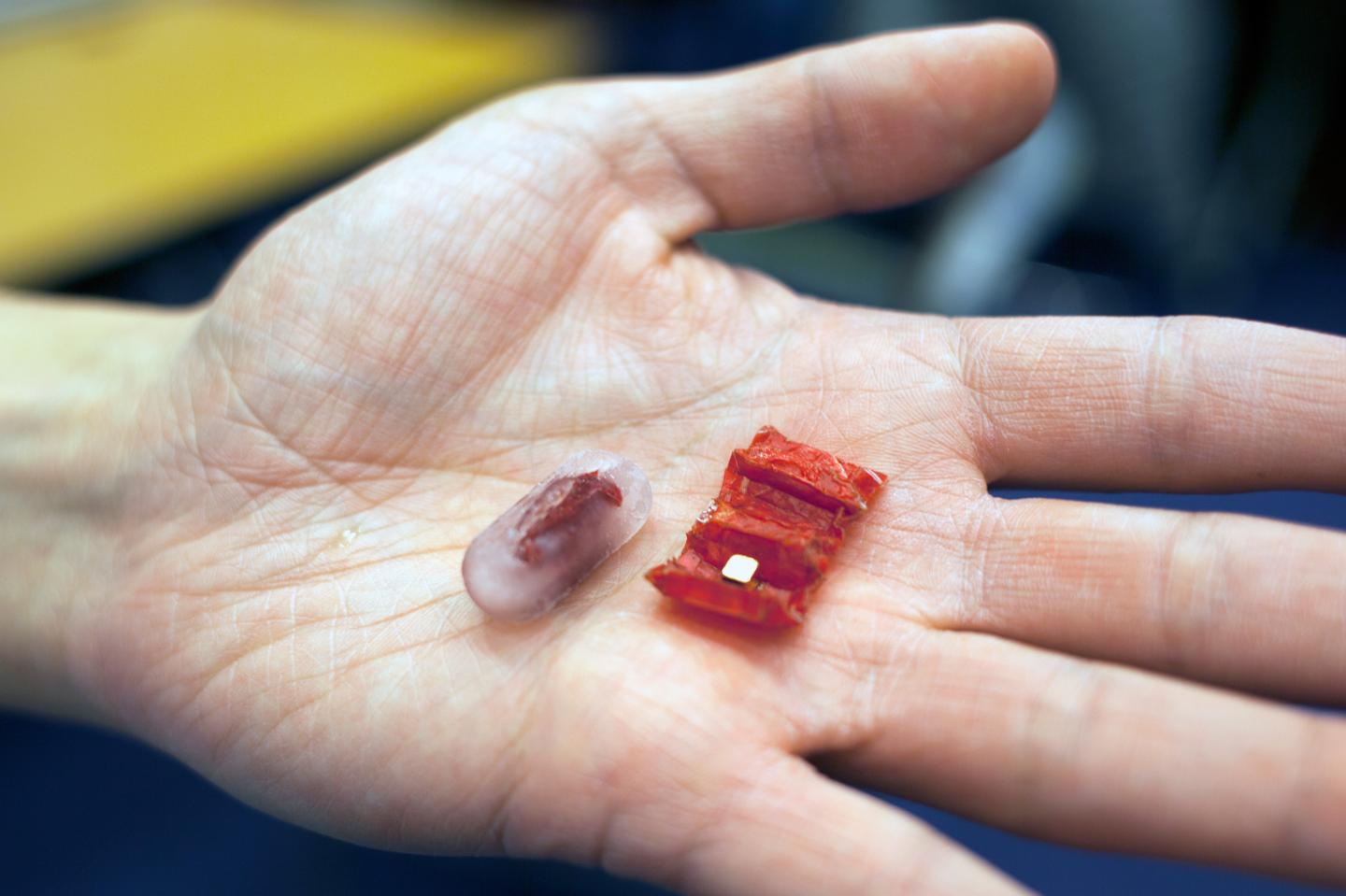 But because the stomach is filled with fluids, the robot doesn’t rely entirely on stick-slip motion. “In our calculation, 20 percent of forward motion is by propelling water — thrust — and 80 percent is by stick-slip motion,” says Miyashita. “In this regard, we actively introduced and applied the concept and characteristics of the fin to the body design, which you can see in the relatively flat design.”

It also had to be possible to compress the robot enough that it could fit inside a capsule for swallowing; similarly, when the capsule dissolved, the forces acting on the robot had to be strong enough to cause it to fully unfold. Through a design process that Guitron describes as “mostly trial and error,” the researchers arrived at a rectangular robot with accordion folds perpendicular to its long axis and pinched corners that act as points of traction.

In the center of one of the forward accordion folds is a permanent magnet that responds to changing magnetic fields outside the body, which control the robot’s motion. The forces applied to the robot are principally rotational. A quick rotation will make it spin in place, but a slower rotation will cause it to pivot around one of its fixed feet. In the researchers’ experiments, the robot uses the same magnet to pick up the button battery.

Porcine Precedents
The researchers tested about a dozen different possibilities for the structural material before settling on the type of dried pig intestine used in sausage casings. “We spent a lot of time at Asian markets and the Chinatown market looking for materials,” Li says. The shrinking layer is a biodegradable shrink wrap called Biolefin. 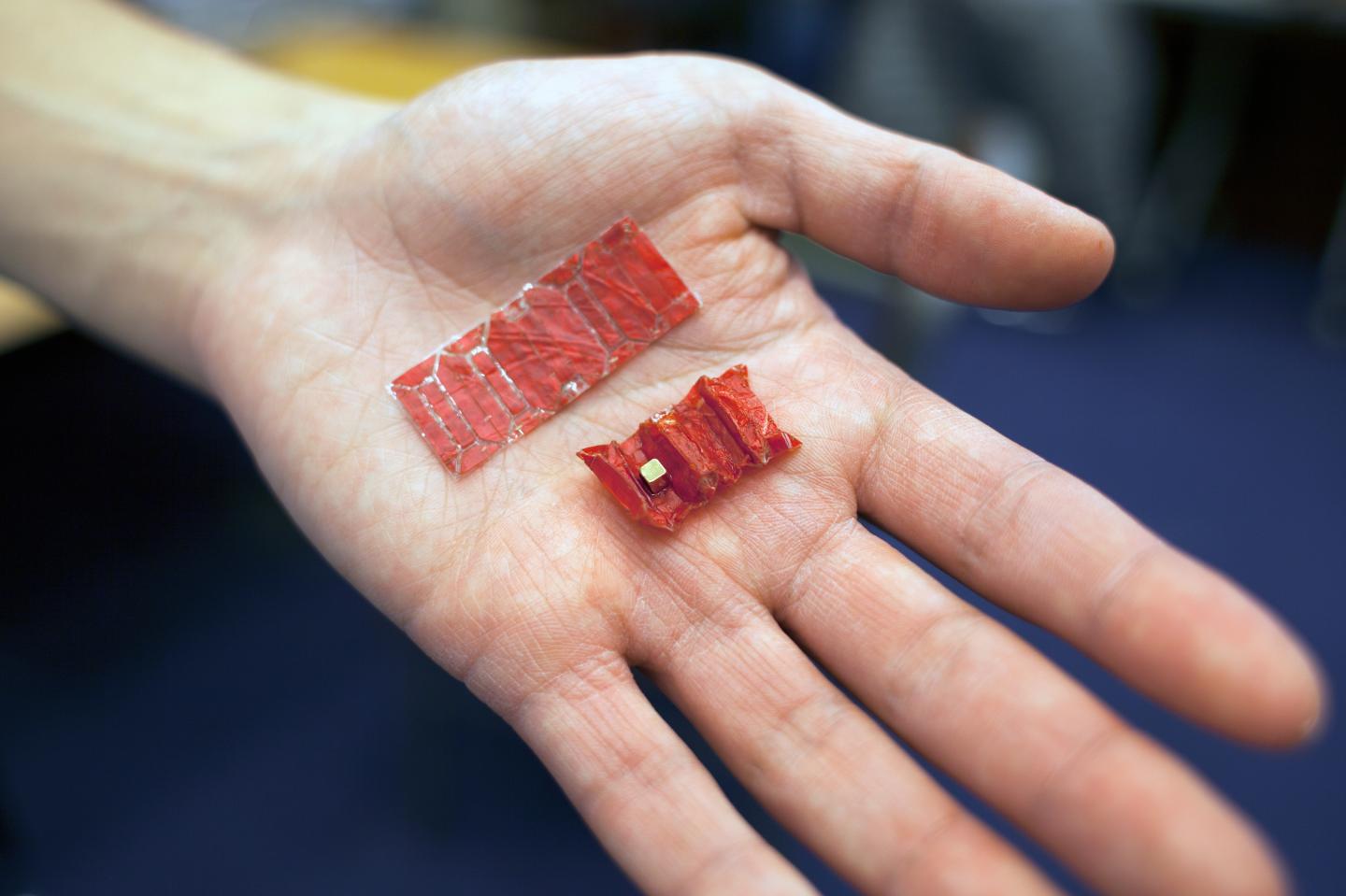 The new robot consists of two layers of structural material sandwiching a material that shrinks when heated. A pattern of slits in the outer layers determines how the robot will fold when the middle layer contracts. (Credit: Melanie Gonick/MIT)

To design their synthetic stomach, the researchers bought a pig stomach and tested its mechanical properties. Their model is an open cross-section of the stomach and esophagus, molded from a silicone rubber with the same mechanical profile. A mixture of water and lemon juice simulates the acidic fluids in the stomach.

Every year, 3,500 swallowed button batteries are reported in the U.S. alone. Frequently, the batteries are digested normally, but if they come into prolonged contact with the tissue of the esophagus or stomach, they can cause an electric current that produces hydroxide, which burns the tissue. Miyashita employed a clever strategy to convince Rus that the removal of swallowed button batteries and the treatment of consequent wounds was a compelling application of their origami robot.

“Shuhei bought a piece of ham, and he put the battery on the ham,” Rus says. “Within half an hour, the battery was fully submerged in the ham. So that made me realize that, yes, this is important. If you have a battery in your body, you really want it out as soon as possible.”