Italian researchers on Thursday unveiled a new robotic hand they say allows users to grip objects more naturally and features a design that will lower the price significantly.

The Hennes robotic hand has a simpler mechanical design compared with other such myoelectric prosthetics, characterized by sensors that react to electrical signals from the brain to the muscles, says researcher Lorenzo De Michieli. He helped develop the hand in a lab backed by the Italian Institute of Technology and the INAIL state workers’ compensation prosthetic center.

The Hennes has only one motor that controls all five fingers, making it lighter, cheaper and more able to adapt to the shape of objects.

They plan to bring it to market in Europe next year with a target price of around 10,000 euros ($11,900), about 30 percent below current market prices. 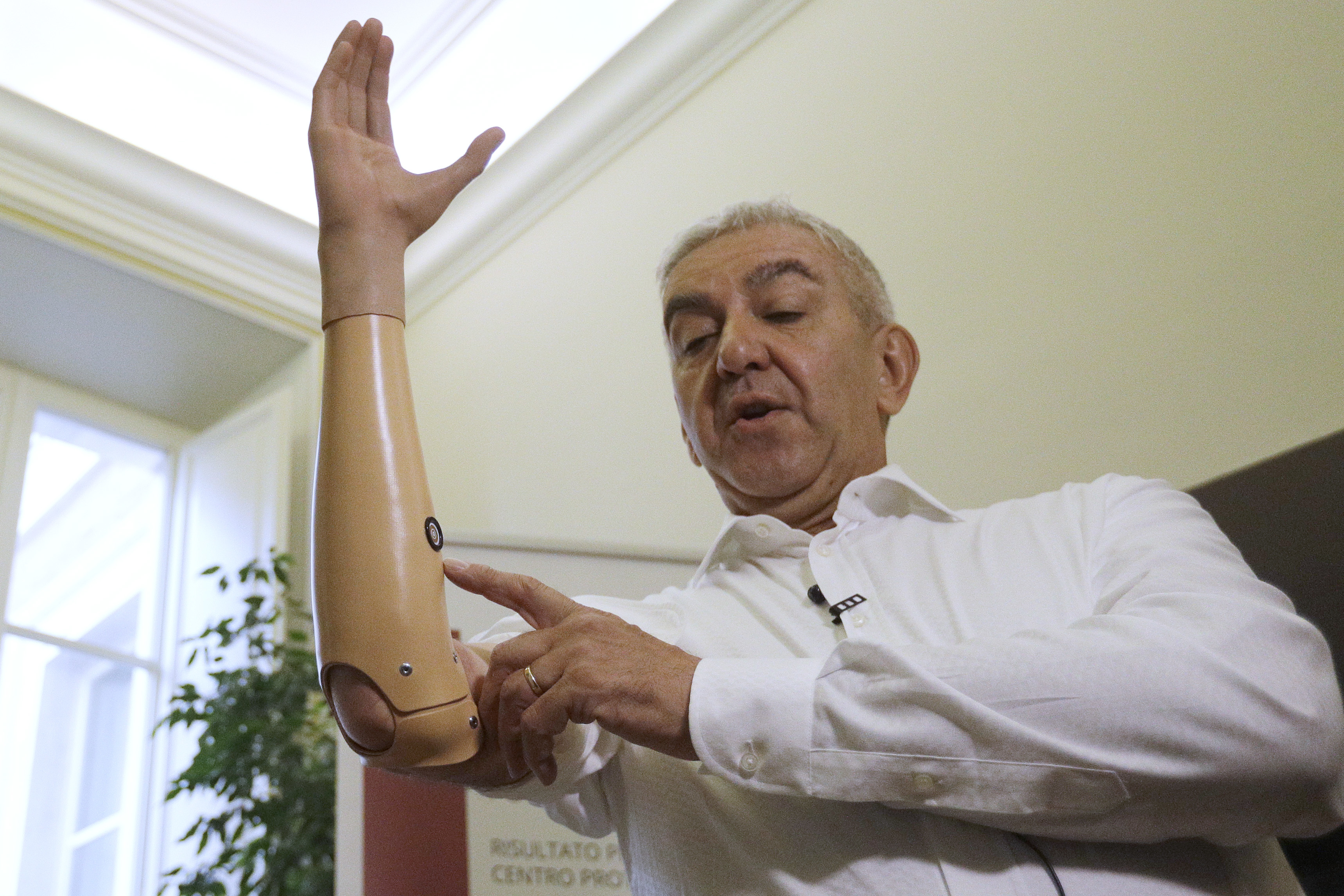 Marco Zambelli shows his prosthetic hand during an interview with the Associated Press in Rome Thursday, May 10, 2018. An Italian government-funded research institute and prosthetic maker unveiled a new robotic hand that they say amputees to grip objects with more precision, and with a mechanical design that will significantly bring down the price of a myoeletric prosthetic hand. (AP Photo/Gregorio Borgia)

Arun Jayaraman, a robotic prosthetic researcher at the Shirley Ryan AbilityLab in Chicago, says the lighter design could help overcome some resistance in users to the myoelectric hands, which to date have been too heavy for some. Italian researchers say the Hennes weighs about the same as a human hand.

In the United States, many amputees prefer the much simpler hook prosthetic, which attaches by a shoulder harness, because it allows them to continue to operate heavy equipment, Jayaraman says.

Italian retiree Marco Zambelli has been testing the Hennes hand for the last three years. He lost his hand in a work accident while still a teenager, and has used a variety of prosthetics over the years. A video presentation shows him doing a variety of tasks, including removing bills from an automated teller machine, grasping a pencil and driving a stick-shift car.

“Driving, for example, is not a problem,” says Zambelli, who has also learned to use a table knife. “Now I have gotten very good at it. I think anyone who’s not looking with an expert eye would find it difficult to spot that it’s an artificial hand.”

About a dozen labs worldwide are working on improvements to the myoelectric prosthetic, with some focusing on touch, others on improving how the nervous system communicates with the prosthetic.

Cost remains a barrier for advanced prosthetic limbs, as well as the fact that the more complex motorized systems tend to be “heavy and fragile. They also get hard to control,” says Robert Gaunt, an assistant professor of rehabilitation at the University of Pittsburgh.

The Hennes design “could make a difference. I think it is a clever approach and one that could see significant benefits for people with missing hands,” he says.

Limitations remain the inability to control individual fingers for tasks like playing the piano or typing on a computer.

“But the vast majority of what many of us do with our hands every day is simply grasp objects,” Gaunt says.