Las Vegas is not only a glittering strip of casinos and hotels but a fast-growing region with more than 2 million residents — and one hospital designated as a highest-level trauma center.

The deadly shooting Sunday that killed at least 59 and sent more than 500 people to area hospitals raised questions about whether that’s enough.

Las Vegas is not the only big city with just one such trauma center. Seattle and Nashville, among others, also are in this category, according to the American Trauma Society, a professional and advocacy organization focused on improving trauma care.

Casey Nolan, a hospital consultant and managing director of Navigant Consulting in Washington, D.C., said what matters most is not the number of high-level centers, but the degrees of coordination across the area’s medical network, including the first responders.

“It’s how well integrated the care is and whether there is a triage system to get patients to the right place in the right time,” he said.

What Makes Up The Network

The highest-level trauma centers are equipped and staffed around-the-clock to provide care for patients who suffer from traumatic injuries such as gunshot wounds, falls and car accidents.

The designation “trauma center” is the result of a validation process at the state or local level. Centers are categorized by Level I, II or III, for instance, in keeping with nationally accepted standards. Centers can also seek additional approval from the American College of Surgeons.

Across the country, there are 217 Level I trauma centers, up from 198 in 2012, according to the trauma society. These centers must see at least 1,200 trauma patients a year and have general surgeons and other specialists immediately available at the facility.

There are another 310 Level II centers that face similar staffing rules, but with fewer education and training requirements. Level III centers have emergency medical staff, but will stabilize severely injured patients and often transport them to higher-level trauma centers.

For decades, the hospital industry viewed trauma care as a money-losing proposition because of the high costs of keeping doctors and nurses on standby 24 hours a day. Trauma centers, particularly those in inner cities, tended to attract more patients without health insurance.

But in recent years, hospitals have been competing to get the designation as a way to increase profits, in part because trauma centers enhance demand for surgery and ancillary services like CT scans. In addition, a trauma designation can boost a facility’s overall reputation, Nolan added.

“Trauma had gotten a bad rap,” explained Nolan. “But in suburban locations, where more people have insurance, you can do pretty well on trauma.”

Some hospitals also began charging a fee — known as a “trauma activation” fee — to help pay for the extra staffing and equipment trauma units require.

Those fees could range from a few hundred dollars to several thousand dollars on patients’ bills, Nolan said. 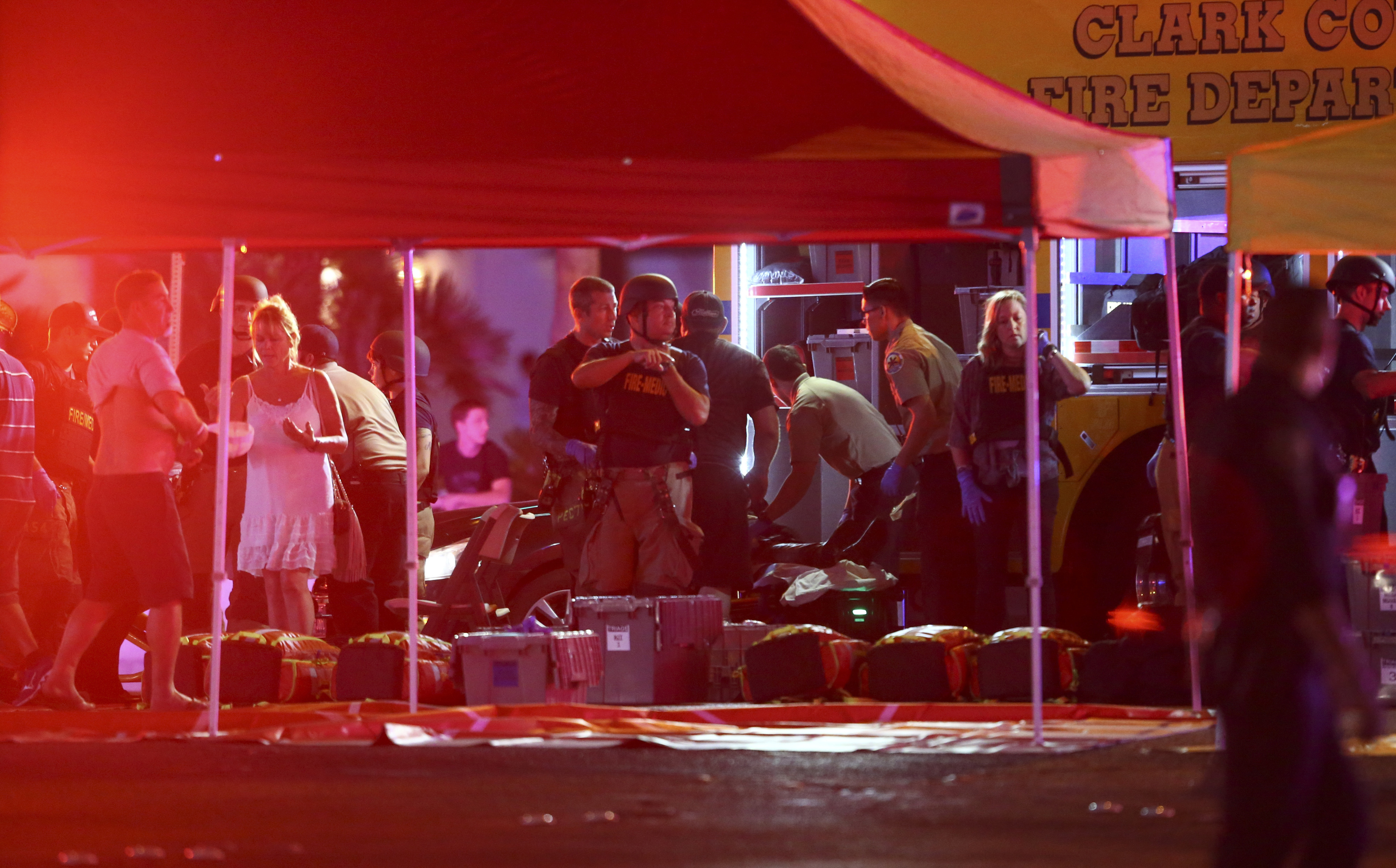 In this Sunday, Oct. 1, 2017 file photo, medics treat the wounded as Las Vegas police respond during an active shooter situation on the Las Vegas Strip in Las Vegas. The deadly shooting from a high-rise hotel by Stephen Craig Paddock that killed dozens of people in a packed concert below has forced other cities to examine their tactics for dealing with this kind of nightmare scenario. (Chase Stevens/Las Vegas Review-Journal via AP, File)

Despite the burgeoning population of Las Vegas and surrounding Clark County, which more than doubled to 2.2 million in the past 25 years, University Medical Center has been Las Vegas’ only Level I trauma center since 1992.

Even the idea of expanding Las Vegas’ trauma network has stirred controversy.

Last year, a state agency rejected applications by three hospitals in the Las Vegas area to be designated as Level III trauma centers.

But opponents argued HCA was motivated by the opportunity to boost profits. The Tampa Bay Times reported last year that the hospital chain charged significantly higher “activation fees” than other hospitals.

Opponents also countered that adding trauma centers would affect University Medical Center’s ability to provide quality care and train doctors. Some experts say it could diminish the number of patients seen at each center.

That’s because the more trauma patients a center deals with annually, the better the results, studies show.

“If you can bring all the patients to one place, then those surgeons become really good at dealing with trauma, instead of spreading it out [around a number of facilities],” said Bill Bullard, senior vice president with the Abaris Group, a California-based consulting firm that advises hospitals on emergency care.

Ian Weston, executive director of the American Trauma Society, said the trauma system worked well in Las Vegas, which is a credit to ambulances and other first responders and their ability to triage patients to hospitals across the city.

Seriously ill patients have the best outcomes when treated at a Level I trauma center, said David Callaway, a professor of emergency medicine at the Carolinas Medical Center in Charlotte, N.C. But “when you have 500-plus casualties and 58 dead … if all the patients went to a Level I, mortality would not be improved, because they would be completely overwhelmed,” Callaway added.

“In theory, the more centers you have the more people you have to deal with injuries. However, no trauma system is able to handle a tragedy of this magnitude.”