Orthopedic surgeons have developed a new device that reduces the pain, scarring and infection risk associated with lengthening a leg bone. It replaces an awkward external brace, which must be attached outside the leg using pins through the skin, with a sleek, magnet-powered telescoping rod that is bolted entirely inside the bone.

“This device is a big step forward for kids with discrepant leg lengths,” said Stanford Children’s Health orthopedic surgeon Scott Hoffinger, MD, who has used it in seven patients, including the first-ever child in Northern California to receive the new implant.

To lengthen a bone using either the old or the new device, a surgeon saws crosswise through the bone and braces the sawed ends one millimeter apart. The body grows new bone into the gap. The patient adjusts the brace to move the bone ends half a millimeter further apart, twice a day, until the bone reaches the desired length. Bracing continues until the bone has hardened. 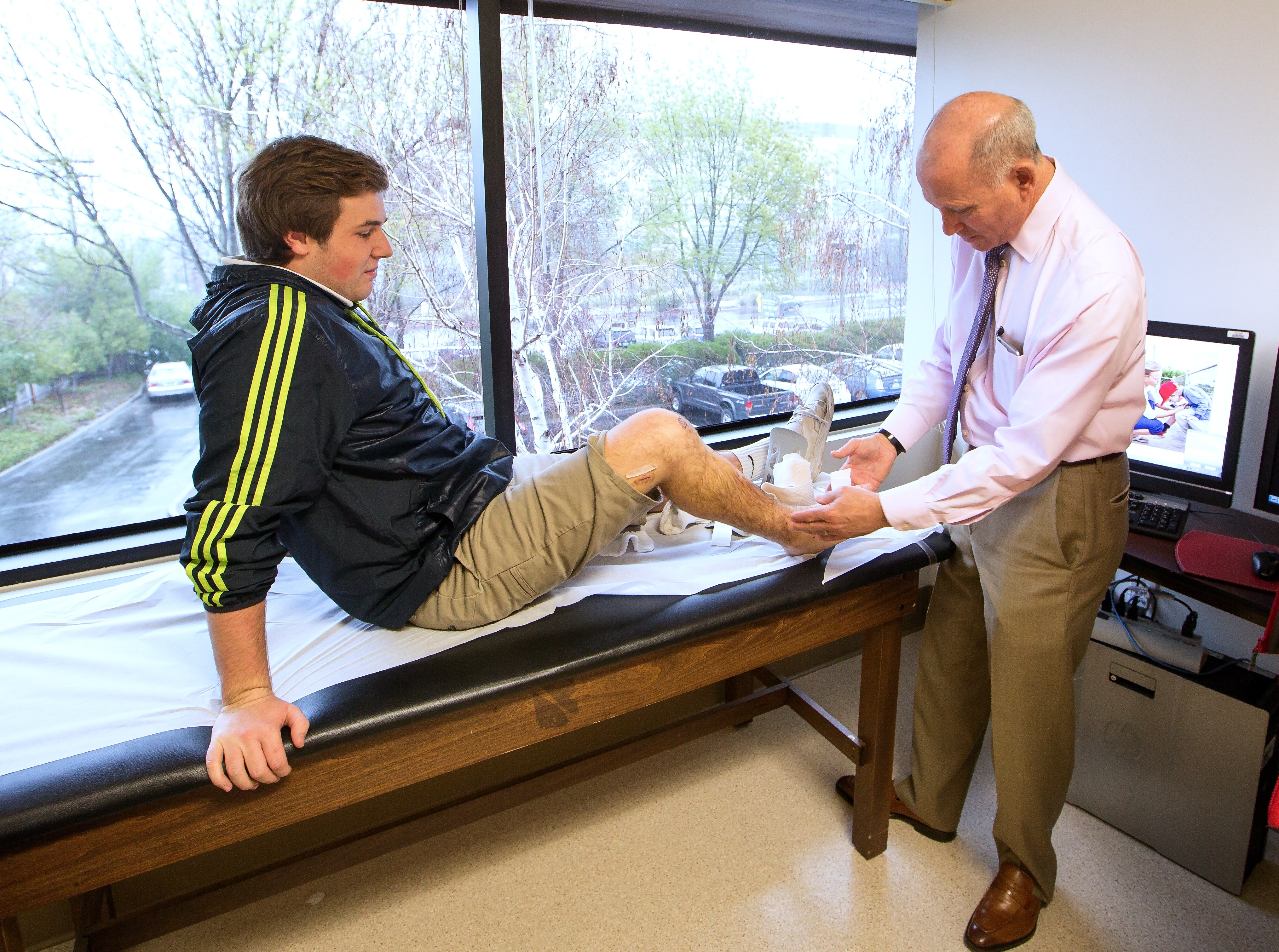 Now, instead of pinning a patient’s leg into a bulky external brace, surgeons can accomplish the same thing by placing a small telescoping rod inside the bone’s shaft to brace and extend it. The implant contains a magnet-powered motor. The patient holds a compatible magnetic motor against the leg for twice-daily, six-minute lengthening sessions.

“The biggest advantage is that we can lengthen a child’s bone without having to pierce his or her skin and muscles for months with an external fixator,” said Hoffinger, a clinical associate professor of orthopedic surgery at the Stanford University School of Medicine and Lucile Packard Children’s Hospital Stanford. “It’s more comfortable for the patient both physically and psychologically to avoid having a big frame outside their leg with pins going through to the bone.”

The external frame is still required in cases where a leg bone needs straightening, such as when a child’s foot is aligned at the wrong angle. However, the new, magnet-powered internal device will work for most children with different-length legs. Leg-length discrepancies may occur because of congenital conditions that cause problems in bone growth, fractures that heal crookedly, and tumors or blood vessel disorders that affect the bone’s growth plates. 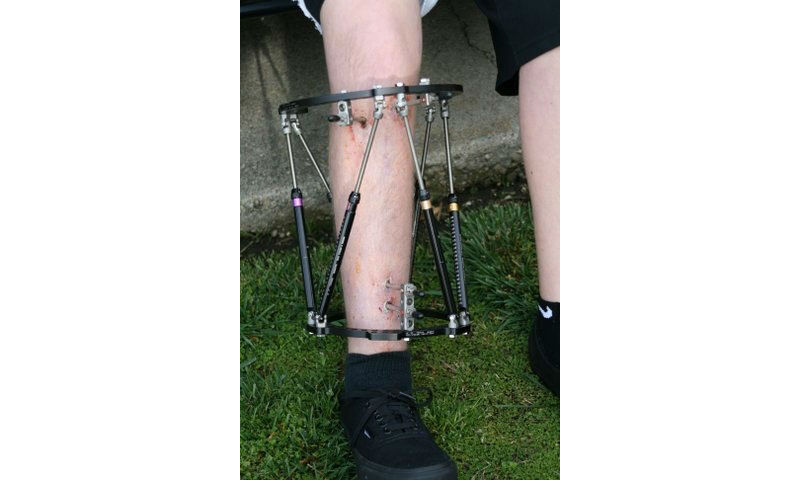 No one better understands the advantages of the magnetic implant than 18-year-old Andrew Hirsch, one of the few patients to have had his leg bones extended using both the old and new techniques. Andrew was born with fibular hemimelia, a disease that caused his right leg to be shorter than his left and to grow very slowly. He had the old-style external fixator used to lengthen the leg’s lower bones by almost three inches in 2010, when he was 13. But a few years later, after a growth spurt, his legs were again uneven. By then, Hoffinger had begun using the internal device in other patients and thought it would be a good fit for Andrew’s needs. In 2014, at Stanford Children’s Health Specialty Services – Emeryville, he explained how the new technology could add more than an inch to Andrew’s right femur. “I was amazed about how much the technology for this kind of stuff had evolved in four years,” Andrew said.

When Andrew’s lower leg was lengthened with the old, external fixator, the process was slow and painful. The pins going through his skin and muscle tugged with every bend of his knee, and his ankle and foot were immobilized in a gigantic horseshoe-shaped brace. The pin sites were prone to infection. Lengthening took three months, and he was on crutches for another three months while his new bone hardened. The fixator required four surgeries to remove. Andrew missed a lot of school and his favorite sports: baseball, competitive swimming, skateboarding and water polo.

When his femur was lengthened with the internal rod, everything was different.

“The fact that there was nothing on the outside of his leg after he recovered from the initial surgery was huge,” said Andrew’s mom, Luann Hirsch. “It really saved us a lot of hassle, because we battled infections the entire time with the external device.”

Instead of the wrenches he had used to expand his external brace, with the magnetic implant, “I had a little ‘x’ drawn with sharpie on my leg, placed the external magnet on top of it, flipped a couple of switches, and grew half a millimeter twice a day,” Andrew said. “And the pain was way more low-key.” 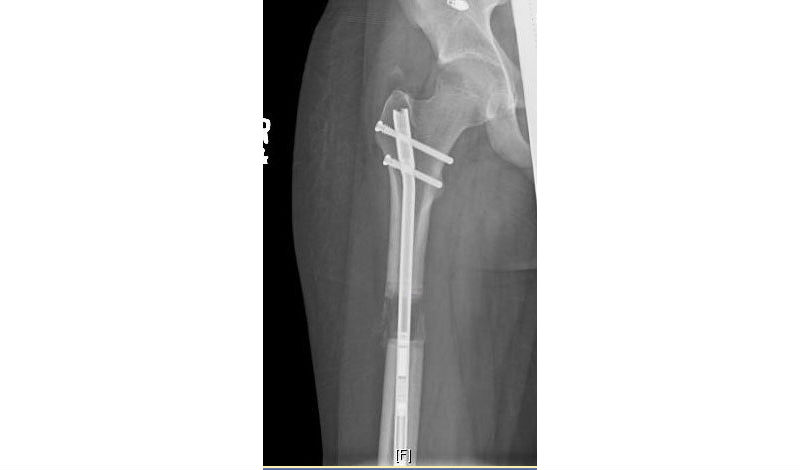 But by 2014, when his right femur was lengthened, surgeon Scott Hoffinger, MD, instead used an internal bracing device that sits entirely inside the bone and is visible only by X-ray. The X-ray image shows the region where wisps of new bone are forming during the lengthening process, which was managed by a magnet-powered bone lengthening device. This magnetic motor in Andrew’s leg was removed January 21, 2016.

His right femur was lengthened 37 mm, almost an inch and a half, requiring five weeks of twice-daily adjustments. Because the rod that holds the magnet is quite strong, Andrew didn’t have to wait for the new bone to harden to begin using it; instead, he could walk on his right leg soon after the lengthening was complete.

“When we x-rayed Andrew’s leg during the process, we saw a gap between the two ends of the bone, the rod inside the bone, and wispy layers of bone being formed around the rod, maturing and getting solid,” Hoffinger said.

The magnetic motor in Andrew’s leg was removed January 21 at John Muir Medical Center, Walnut Creek. (Stanford Children’s Health and John Muir Health are partners in bringing comprehensive children’s specialty services closer to home for families in Contra Costa County and surrounding communities.) It was his easiest journey to the operating room yet: The set of three simple procedures was completed in one day and required only a one-night hospital stay. He was walking again three days later, and everything looked good when Hoffinger saw Andrew for his follow-up visit at Stanford Children’s Health Specialty Services – Walnut Creek.

The magnet-powered device will soon help many more kids walk easily, Hoffinger concluded. “The new magnetic device allows us, as surgeons, to be less disruptive to kids’ lives,” he said. “Andrew has so many plans for the future. It’s great to know that his leg won’t be holding him back.”