Soon after Marty Emerson took over as CEO of Monteris Medical, he and other company officials realized that the company’s robot-assisted brain surgery device had a serious overheating problem. Here’s how he led the company through the crisis. 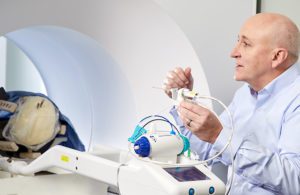 Marty Emerson became CEO of Monteris Medical (Plymouth, Minn.) in July 2016. Within a month, the first report came in of a problem: The probe tip of the company’s NeuroBlate robot-assisted brain surgery device unintentionally heated up during the MRI-assisted procedure.

That discovery would eventually turn into a recall designated as Class I by U.S. FDA  – Emerson’s first in his roughly 30 years in medtech. Understanding and solving the problem would consume Emerson and dozens of Monteris employees over the next two years.

“Almost every emerging technology at some point or another in its maturation process has to go through one of those trials by fire, if you will, where you’re really getting into the core of your science and technology,” Emerson told Medical Design & Outsourcing.

Some regulatory experts said that although the company’s response to the problem wasn’t perfect, it appears to be out of the woods. In October 2018, Monteris won FDA clearance for a laser probe with fiberoptic-controlled cooling for NeuroBlate. The fiberoptic part replaced a metal thermocouple inside the laser probe, enabling Monteris to lift MR scan restrictions. All patient-contacting components are now non-metallic.

In late 2018, Monteris also announced that more than 2,000 patients have been treated with NeuroBlate since its release in 2013; the company also won reimbursement from Aetna and Anthem. Emerson is optimistic that the roughly $10 million a year company – which had seen annual revenue growth of 40% before 2018 – is set to grow again as it turns its focus to sales and marketing.

NeuroBlate uses a robot-guided laser to ablate brain tissue during MRI scans. Some brain surgeons find NeuroBlate a useful surgical option for certain epilepsy and brain cancer patients who don’t have many other alternatives, according to Emerson.

Monteris ticked off a lot of boxes for Emerson after he left the top spot at Galil Medical, the Arden Hills, Minn.–based interventional oncology cryoablation technology company he led until its 2016 acquisition by London-based BTG for up to $110 million.

A stint as a general manager for Boston Scientific in Singapore in the late 1990s, after joining Baxter in a finance role right out of college in 1985, was Emerson’s first foray into a management career that eventually led to the corner office at Minnetonka, Minn.-based American Medical Systems. (AMS’s male urology portfolio is now part of Boston Sci, and its women’s health portfolio is now Astora Women’s Health.)

Although his sales background and communication skills were what initially landed him at AMS, then- CEO Doug Kohrs told us, Emerson’s level-headed and numbers-oriented approach soon became apparent. Kohrs said he considered those unusual traits for a salesperson and eventually promoted Emerson to COO and groomed him for the top job.

“Marty took a very pragmatic approach to solving problems,” Kohrs recalled. “He wasn’t a sky-is-falling kind of guy. He just saw what was going on, and then he got the resources that he needed, and he fixed it.”

Frank Jaskulke, VP of intelligence at Minnesota’s Medical Alley Assn., described Emerson as among the most respected leaders in the state because of his work growing AMS, Galil and now Monteris.

He would need all of his skills after learning of the first unintended probe heating incident in August 2016.

“It became the No. 1 priority,” Emerson told MDO. “We viewed this as an incredibly important initiative that had, at its core, a need to be intensely focused on the science and technology that supports our company.”

Company officials quickly determined the problem involved a coated metal thermocouple that helped measure temperature inside the probe. As Emerson explained it, the connector from the back of the probe to the system had sometimes moved too close to the bore of the MRI magnet, picking up energy that was transmitted down the probe and heating the tip.

The problem only occurred inside particular MRI systems running specific scan types, leading the Monteris team to test more than 20 permutations and combinations from companies including Philips, Siemens and GE.

In December 2016, as the company’s investigation progressed, another probe tip-heating case surfaced; two more incidents occurred shortly before Monteris alerted the FDA in September 2017. In one, a patient died of a brain bleed a few days after the procedure, although it wasn’t conclusive that the probe tip heating was responsible, according to the FDA.

Emerson said that Monteris came to FDA with a thorough understanding of the problem, data from testing the 20 MR equipment permutations, updated instructions for use designed to mitigate the issue and a product development plan to permanently resolve the problem.

Communication and transparency among the Monteris team, with the FDA and with physicians were front-of-mind for Emerson during this process, he told us, recalling a number of late nights when executives and regulatory experts jointly edited responses to the FDA. An accountant by training, he also tried to stay mindful of what he didn’t know.

“I’m not an FDA expert,” he explained. “I relied heavily on the scientists and the technologists and the engineers and the experts on my team to get us through this process.” 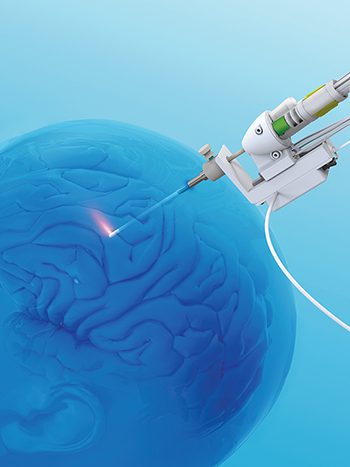 Although Monteris appears to have done many things right and appears to have succeeded in eliminating the problem, according to regulatory experts, there are lessons to be learned for companies facing similar problems.

Former FDA analyst Madris Tomes, now CEO of medtech safety software company Device Events, said she was especially impressed that out of the 342 adverse event reports she counted for the company since 2010, about half came from Monteris’ salespeople – a much better record than the industry as a whole.

“I’ve seen a lot of things handled much worse than this,” Tomes added.

Michael Drues, a Southern California-based regulatory consultant, questioned why more than a year elapsed between Monteris learning of the problem and alerting the FDA.

“Unfortunately, there is no regulation that requires this for a 510(k) yet – there is for PMAs – but a company does have an obligation, in my opinion, to let FDA know what is going on ASAP. This was a Class I recall, which has potential for serious injury and death.”

“There was never any suggestion from FDA that we didn’t move fast enough,” Emerson told us when asked about the time gap. “We were doing an immense amount of testing along the way.”

There were only two instances of probe tip overheating over the course of 12 months, he added. After Monteris issued updated instructions for use in early October 2017, the company received no reports of unintended heating for the year preceding FDA approval of its new technology, Emerson said.

As of press time, representatives for the FDA had not responded to a request for comment on the Monteris recall.

Monteris emphasizes thorough and complete adverse event reporting, Emerson said, adding that he strives to remember that the company puts its tools in physicians’ hands to help patients.

“The vast majority of the patients … are really well served by the technology that we’ve provided to those physicians,” Emerson said. “I can’t let an unfortunate outcome stop us.”