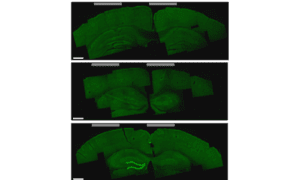 A brain slice that shows the hippocampus cells that were activated by the new stimulation technique (bottom image, lighter green areas on the left). [Image from the researchers]

Massachusetts Institute of Technology researchers have figured out how to non-invasively deliver electrical stimulation to specific parts of the brain.

In collaboration with Beth Israel Deaconess Medical Center (BIDMC) and the IT’IS Foundation, the MIT researchers have placed electrodes on the scalps of patients to stimulate regions that are deep in the brain, making a non-invasive, less risky and cost-effective way to stimulate the brain.

“Traditional deep brain stimulation requires opening the skull and implanting an electrode, which can have complications Secondly, only a small number of people can do this kind of neurosurgery,” said Ed Boyden, an associate professor of biological engineering and brain cognitive sciences at MIT and senior author on the study, in a press release.

Brain stimulation is used to treat Parkinson’s disease, obsessive compulsive disorder, epilepsy and depression. Doctors are hoping to expand the use of brain stimulation to be able to treat disorders like autism, and this new research could bring them one step closer to that goal.

“With the ability to stimulate brain structures non invasively, we hope that we may help discover new targets for treating brain disorders,” said Air Grossman, the paper’s lead author and a research fellow at Imperial College London.

To treat Parkinson’s disease, electrodes are placed in the sub thalamic nucleus below the thalamus deep within the brain. The electrical impulses that get delivered are known to improve symptoms of the disease, but the surgery itself to implant the electrodes is the risky part.

There have been other forms of non-invasive brain stimulation that have been used to improve memory or help with stroke recovery. Another technique used is known as transcranial magnetic stimulation (TMS), which has been approved by the FDA to treat depression. The non-invasive TMS stimulated deep brain structures, but can also cause other surface regions to be strongly stimulated which can cause modulation of several brain networks.

“You can go for deep targets and spare the overlying neurons, although the spatial resolution is not yet as good as that of deep brain stimulation, said Boyden.

Targeted stimulation was tested in mice by the director of MIT’s Picower Institute for Learning and Memory Li-Huei Tsai and a team. Their research showed that small regions deep in the brain could be stimulated and the stimulation site could be shifted to activate different parts of the motor cortex to make the mice move their limbs, ears or whiskers.

“We showed that we can very precisely target a brain region to elicit not just neuronal activation but behavior response,” said Tsai. “i think it’s very exciting because Parkinson’s disease and other movement disorders seem to originate from a very particular region of the brain, and if you can target that, you have the potential to reverse it.”

The hippocampus region of the brain, which is the part that is responsible for memories, did not have neurons activate in the cortex during stimulation.