Olympus, a global technology leader in designing and delivering innovative solutions for medical and surgical procedures, among other core businesses, announced today that it has received FDA 510(k) clearance of claims that the ENDOCUFF ® endoscopic device, the previous iteration of its recently launched ENDOCUFF VISION, improves Adenoma Detection Rates (ADR) during colonoscopy over standard colonoscopy.  Due to its relative newness, peer-reviewed studies are still required to show clinical equivalency of the ENDOCUFF VISION, though the material, proprietary hinge design and therefore moment of force are identical among the two products.

Colorectal cancer (CRC) is the second most common cause of cancer-related mortality. Colonoscopy has long been considered the gold standard for detecting colon cancer, and Olympus is the leading provider of colonoscope technology to caregivers. However, interval cancers do arise because of adenomas (pre-cancerous polyps) that are missed by the physician and can become malignant (colorectal cancer). For each 1% increase in adenoma detection rate (ADR) there is a 3% reduction in the risk of interval cancer i. 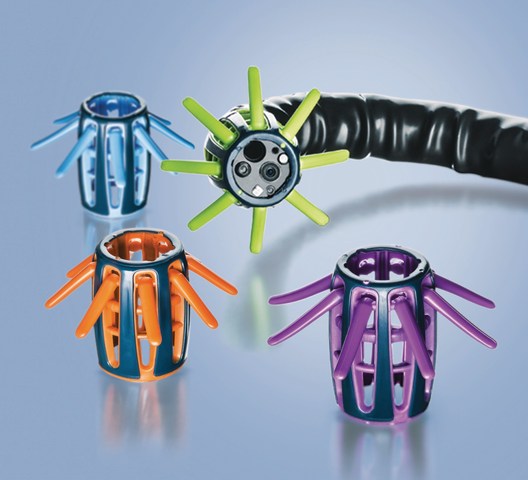 FDA has given 510(k) clearance for the Olympus ENDOCUFF claim that the device results in a statistically significant and clinically relevant improvement in adenoma detection rate (ADR), as compared with unassisted colonoscopy, due to its design which enables manipulation of bowel folds for maximized visualization of mucosa. (Credit: PR Newswire)

An FDA meta-analysis has determined that the ENDOCUFF results in a statistically significant and clinically relevant improvement in ADR, as compared with unassisted colonoscopy, due to its design which enables manipulation of bowel folds for maximized visualization of mucosa. The analysis was based on several multi-center studies, one of which indicated that ENDOCUFF increases the ADR by 14.7% (95%CI 6.9-22.5%) ii.

In addition to being designed to increase ADR, the ENDOCUFF and ENDOCUFF VISION allow for controlled withdrawal of the colonoscope; are designed to minimize difficulties associated with “looping” of the scope; can minimize intubation force and insertion resistance; as well as minimize risk of mucosal trauma, among other claims.

The ENDOCUFF and ENDOCUFF VISION are devices that attach to the distal end of a colonoscope, with multiple flexible “arms” that fold within the product during intubation and forward movement and open out when drawn backward, thereby controlling the field of view. How the ENDOCUFF VISION works:

“The ENDOCUFF is the first colonoscope technology to be cleared by the FDA to claim improved adenoma detection rates,” said Kurt Heine, Group Vice President of the Endoscopy Division at Olympus America Inc. “Since the time that the industry has been using ADR as a standard, Olympus has been dedicated to helping its customers achieve ADR improvements – which can result in better quality of care, reduced cost, and enhanced patient satisfaction.”