In Part 1, I honed in on a few companies exploring the digital realm pertaining to medical devices. Now, we’ll focus on how telehealth could change the road to recovery, while three more companies who attended the 2019 annual meeting of the American Academy of Orthopaedic Surgeons provide insight on their products.

Reflexion Health is a virtual rehabilitation therapy company that created VERA, a Virtual Exercise Rehabilitation Assistant, who brings therapy to one’s own home. VERA guides individuals like a physical therapist would by motivating and assessing exercise movements that patients are practicing. While at AAOS, I talked with CEO of Reflexion Health, Joseph Smith, MD, PhD., about the challenges and successes of having physicians utilize VERA with their patients.

Smith says what Reflexion Health first focused on when creating VERA was the post-acute spending after orthopedic surgery and the recovery time.

“The surgeons are great, the implants are great, but sometimes the outcomes aren’t as great because the patient’s engagement and their own recovery lags,” says Smith. “So, we took a little bit of technology and fashioned it together in a little kit that goes into the patient’s home.”

Also called VERAHome, VERA prepares patients prior to surgery and after surgery for the road to recovery.

“It gets there prior to surgery, it stays after surgery, and it tells them what to expect while doing a little bit of prehab with them,” says Smith. “The avatar tells you what you should do, and then there’s an embedded 3D imaging system that keeps track of what you’re doing and gives you real time feedback.”

The program instructs and records the patient’s exercise performance at home and has the ability to measure 26 joints and limbs in motion at 30 times per second. With audio-visual feedback, patients can have a better understanding of what they are doing right or wrong to progress their recovery.

“It keeps track of functional assessments, such as how you’re doing in terms of flexion extension and your ability to balance. By just objectively measuring it, you get a better outcome and people are more attentive to it,” says Smith. “We’ve watched as we get compliance rates that are maybe twice as much as you would normally get. We’re getting recovery times that look to be as much as a month faster.”

At the same time, Smith says the element of having therapy at the comfort of one’s own home is definitely a factor in higher compliance rates. Additionally, he says it saves people the travel time, saves patients the copay, and allows clinicians to get an assessment of if the patients are active and doing what they need to be doing.

“Patients know they’re being watched,” says Smith. “So, they actually do their work.”

Although Reflexion has brought therapy to the patient’s home, it doesn’t eliminate the need for a physical physician, Smith says.

“You still need a therapist. Sixty percent of patients in our trial didn’t see a physical therapist, but 40 percent still did need to see one,” says Smith. “VERA allows the therapist to function at the top of their license. They get to be engaged when they need to be, so it’s a little more rewarding for them.”

Overtime, Smith hopes to expand VERA to resonate with individuals worldwide. Currently, VERA is only available in English and Spanish, but he says he would like to be completely multi-lingual all the time. He also hopes to add a cardiac and pulmonary rehab element, since natively he’s a cardiologist.

“That’s in the offing as we get more and more traction,” says Smith. “I would like to do everything, but you have to start somewhere.”

Overall, Smith is hopeful that this way of engaging patients will provide better outcomes for both the patient and physician. It takes a special mix of elements to increase compliancy, especially when patients aren’t thrilled they have to participate in rehab, and Smith believes Reflexion utilizes these elements in their technologies.

“I think different activities that you ask people to do, whether it’s asking them to do something new, something familiar, or give up something that’s too familiar, all of those are different bits of magic to build in,” Smith says.

Eventually, he thinks making healthcare technology almost invisible will be the future.

“I like to think of this as the future, where it’s not on your screen, it’s in your ear already,” says Smith. “You might be listening to music and a little avatar can come in and say, ‘Hey, I know you’re coming up on a Dunkin Donuts, but maybe you can walk past it this time.’ Or ‘You’re doing pretty well on your step count, but take the stairs instead of the elevator.’”

Also focusing on the road to recover is CyMedica Orthopedics’ e-vive wearable, a muscle activation therapy and patient engagement solution for knee conditions.

E-vive addresses the pain associated with knee osteoarthritis, and precisely places electrodes over specific areas of the thigh for direct target of the quadriceps muscles. Additionally, it contains built-in sensors to help measure and collect data of the knee joint’s range of motion.

“This engagement system allows patients to track their progress, and allows that progress to be uploaded to the cloud so the provider can see how they’re doing as well,” says Robert Morocco, president and CEO of CyMedica. “It’s a type of patient monitoring in combination with an at-home, engagement therapy.”

The e-vive app allows individuals to interact with their data to gain feedback on their therapy. The e-vive NMES system is operated through the app and can be downloaded onto any smart device. Using the app, individuals gain control of their own therapy and can customize settings to achieve more comfortable muscle contractions. Additionally, they have also integrated the CyMotion controller which manually delivers the e-vive NMES system to the electrodes on a person’s skin.

“Not all of the patient population has a smartphone to engage,” says Morocco. “We offer a version of the product that is a standard controller that’s tethered to the device.”

Both Morocco and Bryti Ketchum, VP of marketing for CyMedica, say the Osteoarthritis market is one that needs more attention.

“As we look to the future, we’re really intrigued by the Osteoarthritis prevention market,” says Ketchum. “When we look at future patients, we want to integrate features into our device that are much more relevant to the Osteoarthritis market and look at how to engage individuals much longer in their care process.”

Ketchum says one of the most prevalent underlying conditions of Osteoarthritis is muscle strengthening, so informing individuals on if they really are strengthening their quadriceps during the process can help increase a person’s activity level without increasing their pain.

“This is a patient population that doesn’t have a whole lot of options. They’re generally told to lose weight, exercise…obviously we want to reduce the opioid epidemic, but physicians really don’t have a lot of tools in their tool kit that they have to offer to these patients,” Ketchum says.

Ketchum also added that this patient population often seeks treatments that do not involve surgery, so e-vive’s muscle strengthening technology can really cater to these patients.

Overall, the app provides information on stimulation intensity, range of motion for flexion-extension, and provides a progress tracker.

“There’s a push to get patients more involved. There’s a need to have them more involved because of the reality we face with the economics of healthcare,” says Morocco. “So, products like ours that incentivize patients to do their own rehabilitation, to make themselves better, to participate in their healthcare, I think they’re going to continue to grow and take a larger share.”

Lastly, I met with DePuy Synthes experts pertaining to their Attune Knee System and the Kincise Surgical Automated System. The Attune Primary Total Knee System utilizes a variety of features that offer better stability and motion to the patient. The Attune Knee System integrates the Gradius Curve and is designed to gradually reduce the femoral radius, which provides a seamless transition from stability to rotational freedom through a patient’s range of motion.

Additionally, the S-curve of the Sofcam Contact was designed to provide smooth engagement for gradual femoral rollback and stability in flexion, while also reducing stresses transferred to the tibial spine. The tibial base also includes Attune S+ Technology that is designed to enhance tibial fixation with a combination of macrolock features and a microblast surface finish on the tibial base.

DePuy Synthes says they’ve done more than 800,000 implantations and have one of the most extensive data sets on their implant. They’ve also implemented a surgical technique for the implantation of the Attune Knee System with the Intuition Instrumentation.

The Intuition Instruments allow surgeons and hospitals to use fewer instruments that are lightweight, reducing weight by 51 percent. Additionally, it utilizes color coded and clear markings to reduce OR surgical errors. 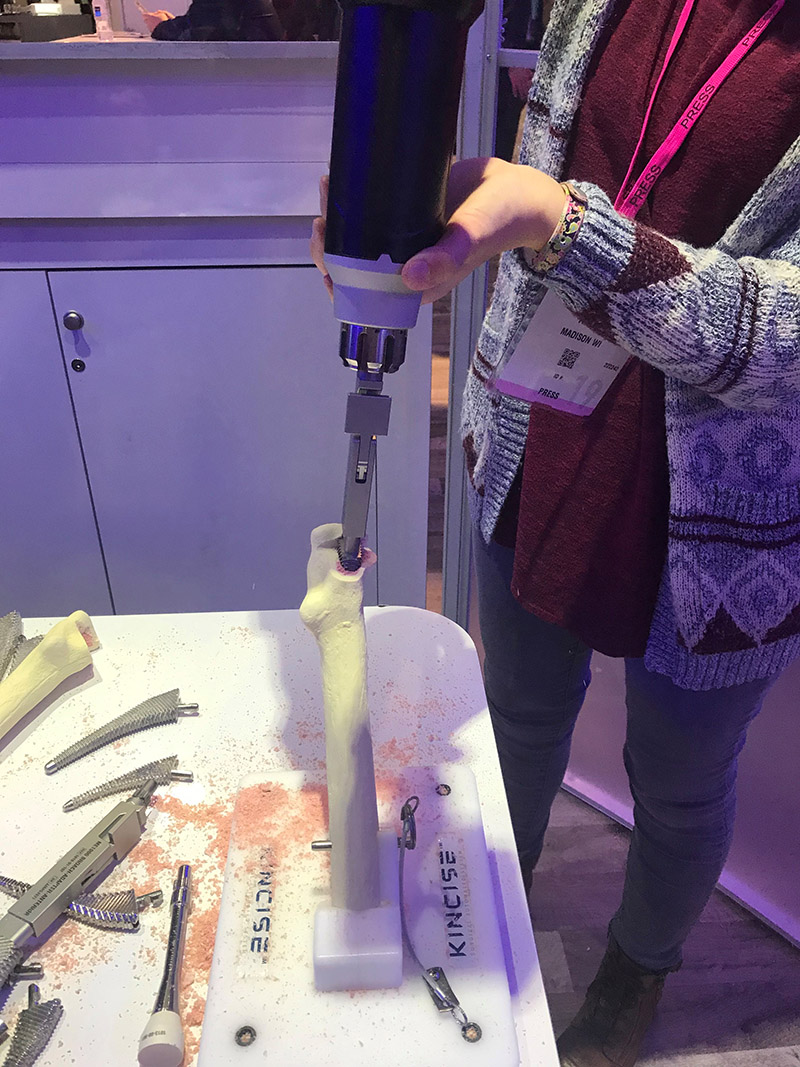 As more healthcare companies continue to integrate technology and automate their services, patients will hopefully see more effective surgeries and procedures being brought to the market.

“It’s such a fabulous time to think about innovating in healthcare in the U.S., because we already commit more than enough money to do a good job at healthcare,” says Smith. “We don’t yet do a great job, but the money is already on the table and the opportunity is there. This feels like an unbridle opportunity to make things better for patients and for our healthcare system.”