A new study finds significant differences between the blood clot structure in adults and newborns, helping researchers better understand the challenges in addressing post-operative bleeding in neonatal patients. The researchers also found that the current standard of care for treating post-operative bleeding may pose an increased risk of thrombosis in newborns compared to adults, which researchers hadn’t suspected. The study was performed by researchers at North Carolina State University, the University of North Carolina at Chapel Hill, Emory University, Children’s Healthcare of Atlanta and the Georgia Institute of Technology.

“We knew that neonates – infants less than one month old – are more likely than adults to suffer from severe bleeding after heart surgery, which poses a variety of health risks,” says Ashley Brown, first author of a paper on the study and an assistant professor in the joint biomedical engineering department at NC State and UNC-Chapel Hill.

“The current standard of care is to give neonatal patients blood products – such as a protein called fibrinogen – derived from adult blood,” Brown says. “But neonatal blood and adult blood aren’t the same; many of the components involved in clotting in newborns have differing levels of activity, or effectiveness, compared to the same components in adults. Our goal was to better understand how clotting in neonates differs from that in adults, so that we can move closer to developing more effective treatment strategies for these infants.” 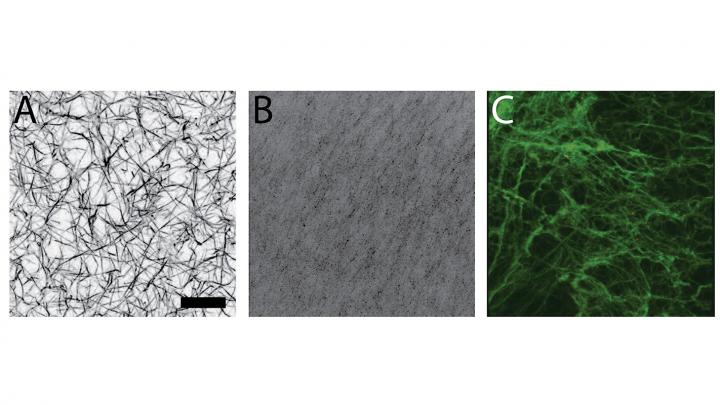 These are laser scanning confocal microscopy images of clots constructed from adult fibrinogen (A), neonatal fibrinogen (B), or a mixture of the two (C). Scale bar= 20 μm. (Courtesy of Ashley Brown)

The researchers also evaluated how long it took these clots to dissolve. This is important because blood clots that don’t break down can form thrombosis or be released into the bloodstream and cause a stroke.

“This suggests that using adult fibrinogen in neonatal patients may pose an increased risk of embolism or other adverse thrombotic events,” says Nina Guzzetta, MD, corresponding author on the study, associate professor of anesthesiology at Emory University School of Medicine, and a pediatric cardiac anesthesiologist at Children’s Healthcare of Atlanta.

“This work drives home that newborns are not just small adults, and we still have much to learn about clotting in neonates,” Guzzetta says. “It also tells us that there is a great deal of room for improvement in the current standard of care for post-operative bleeding in neonates.

“We are investigating several approaches that may help address this problem, evaluating various modes of action,” Brown says. “It is possible that we can use various external factors that promote clotting to stimulate the fibrinogen in neonates to form a denser clot. We are investigating possible alternatives to help neonates form a better clot after major surgery without having to use adult fibrinogen. For example, we are investigating the use of synthetic platelet-like particles developed by our team to augment hemostasis – the biological process that stops bleeding – in blood samples collected from these patients.”