You’ve injured your knee. A doctor straps a listening device to it, and the noises you hear coming out of it are cringe-worthy. “Crackle! Krglkrglkrgl! Snap!”

Your knee isn’t breaking; it’s only bending, and in the future, those sounds could help doctors determine whether the convalescing joint is healthy yet, or if it needs more therapy.

Research engineers at the Georgia Institute of Technology are developing a knee band with microphones and vibration sensors to listen to and measure the sounds inside the joint.

It could lead to a future device to help orthopedic specialists assess damage after an injury and track the progress of recovery.

Former NCAA Athlete
Omer Inan has suffered knee pain himself and had been thinking about developing such a device for some time. The assistant professor of electrical and computer engineering is a former discus thrower who was a three-time NCAA All-American at Stanford University and the school record holder.

He spent years whirling around like a tornado, which knees aren’t built for. Add to that the stress and strain of weight training that included squats with 500-pound loads.

“I would always feel like my knee was creaking or popping more if I was putting more stress on it,” Inan said.

Then the Defense Advanced Research Projects Agency (DARPA) issued a call for research proposals on wearable technologies for assisting rehabilitation, and the researcher at the School of Electrical and Computer Engineering pitched his idea.

Inan’s group has published a paper on the latest state of development in the journal IEEE Transactions on Biomedical Engineering online, official print publication is pending. The research is being sponsored by the DARPA Biological Technologies Office. Inan leads a team of 17 researchers, including Georgia Tech faculty in ECE and Applied Physiology and graduate students.

Delightfully Gross
When he heard the first recordings of crackly grinding in early experiments, Inan was delighted. “It was a lot louder than expected and a lot clearer,” he said. That meant instant progress.

To others, it just sounds gross. “It’s a little bit like some kind of Halloween stuff happening. You’re listening to your bones rubbing on each other, or maybe cartilage,” Inan said.

Some 100 years ago, physicians thought that racket might contain a message and listened to it with large stethoscopes. Now, Inan hopes that in the future, medical research will build on the acoustical sensing technology his group is designing, and eventually decode the sound into useful patterns.

Currently, the researchers are graphing out the recorded audio and matching it to the joint’s range of motion to see where exactly in the leg’s extending and bending the knee creates creaks and pops. The result has peaks and squiggles that resemble an electrocardiogram or other physiological signal.

The acoustic pattern an injured knee produces is markedly different from that of an intact knee. “It’s more erratic,” Inan said. “A healthy knee produces a more consistent pattern of noises.” 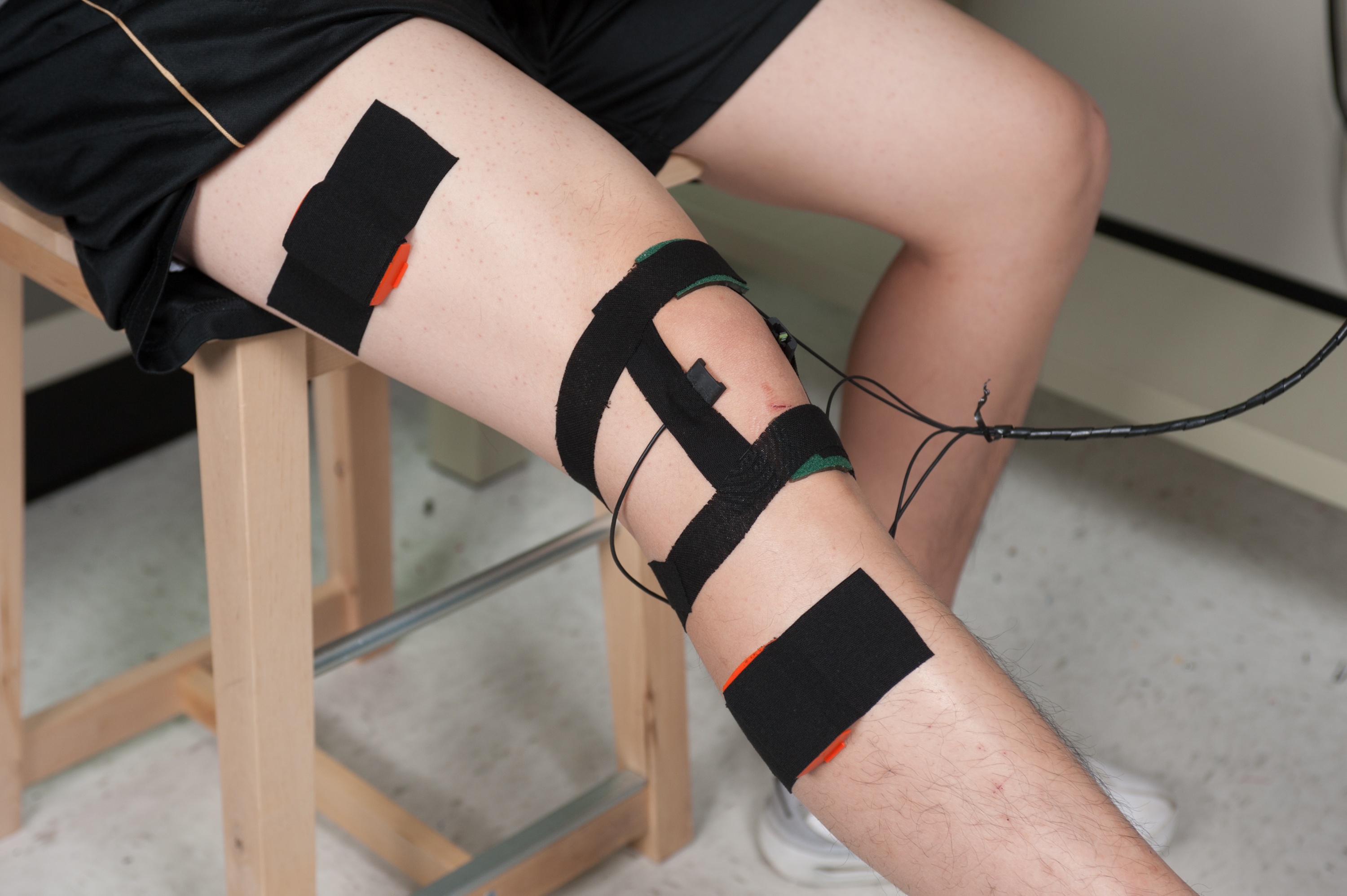 MEMS microphones and piezoelectric strips pick up sounds of a bending and extending knee. Prof. Omer Inan is engineering a device to convert knee joint sounds into a signal he hopes medical researchers will be able to use.

Battlefield Knee Injuries
If paired with medical research, Inan’s acoustic device could lead to inexpensive, wearable monitors, which could benefit athletes who have overburdened their knees, and elderly patients who have slipped and fallen, but DARPA’s interest is to cut down on repeat battlefield knee injuries and help get soldiers back to duty safely.

“What most people don’t know is that musculoskeletal injuries of the knees and ankles are among the top reasons for discharge for active duty service members,” Inan said. Backpacks weighing up to 100 pounds press down on soldiers, as they march for dozens of miles over tricky terrain, climb over obstacles on battlefields, and crouch in cramped spots for hours.

Even without a fall or contortion, a soldier can land in surgery then in rehab. The problem may seem fixed months later, but too often it’s not, and too often that’s because of re-injury.

Like professional athletes, soldiers can be overly eager to leap back into the fray. “They were there in the first place because they wanted to help our country, so they want to get back to it,” Inan said.

Overcoming Challenges
After surgery and therapy, that knee may feel like new, but when a fervent soldier jumps back onto it, weaknesses from the injury kick in. As a result, re-injuries are 10 times more frequent than initial ones.

An inexpensive wearable device could give soldiers and clinicians in the future feedback on convalescing knees to help them avoid major re-injury by refraining from heavy workloads when needed.

That could benefit service members in the long run, too. Joint injuries compound over time, setting retired service members up for pain and loss of mobility long into civilian life. “You can have cases of early osteoarthritis,” Inan said. 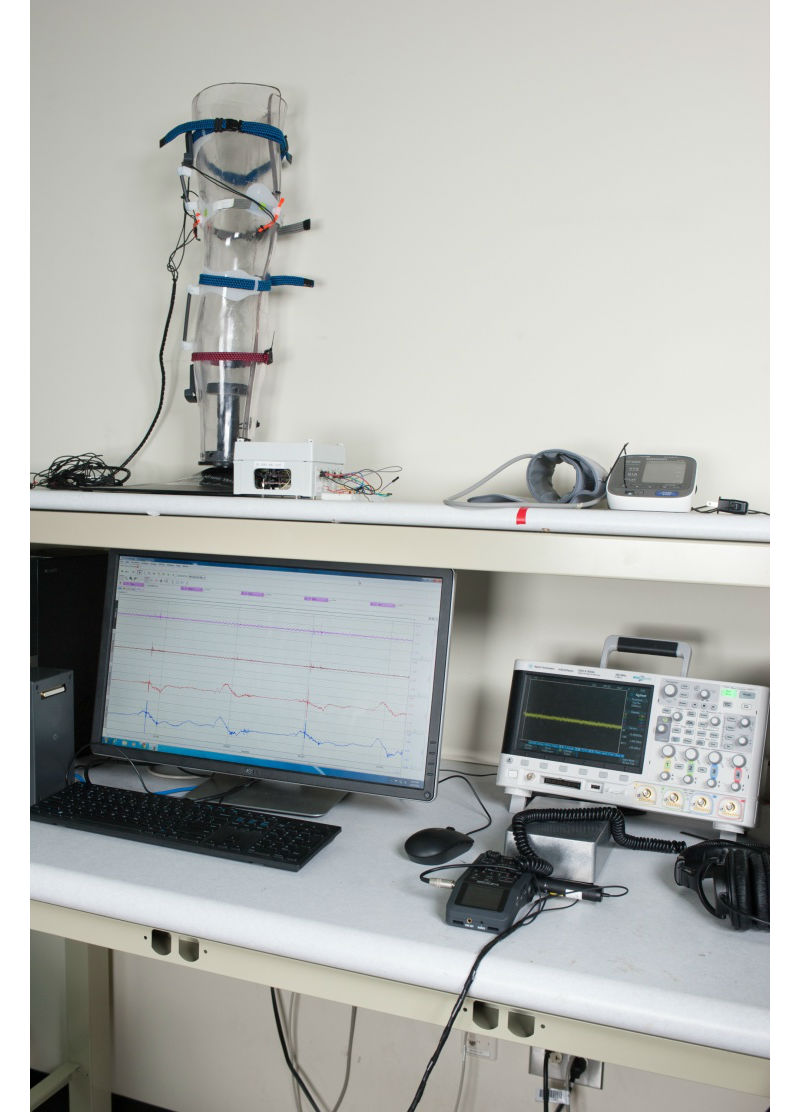 Knee sounds are converted into a moving graph and recorded. Prof. Omer Inan is engineering a device to pick up knee joint sounds and convert them into a signal he hopes medical researchers will be able to use.

But at this point, Inan’s mission is to record the sounds in potentially useful quality. That has posed some challenges. The knee joint is surrounded by fluid, which blunts sound waves that are exiting the joint for the skin. Also, when a patient moves around, that causes extraneous noises that can drown out useful sounds.

“The fact that the measurement has to occur by definition during movement is a challenge, because you can’t just tell the person to be still and avoid motion artifacts,” he said.

Smart Phone-Like Mics
The researchers combined microphones with piezoelectric film. The film is a hypersensitive vibration sensor and collects the best sound, but it is very sensitive to interference. The microphones placed against the skin make for an ample backup and for a more practical device.

The knee monitor also takes advantage of a technical advancement you will find in your smart phone. Micro-electromechanical systems microphones, or MEMS, integrate better with current technology than microphones based on previous technologies, and that also makes the microphones downright cheap – 50 cents to a dollar – for a very affordable device.