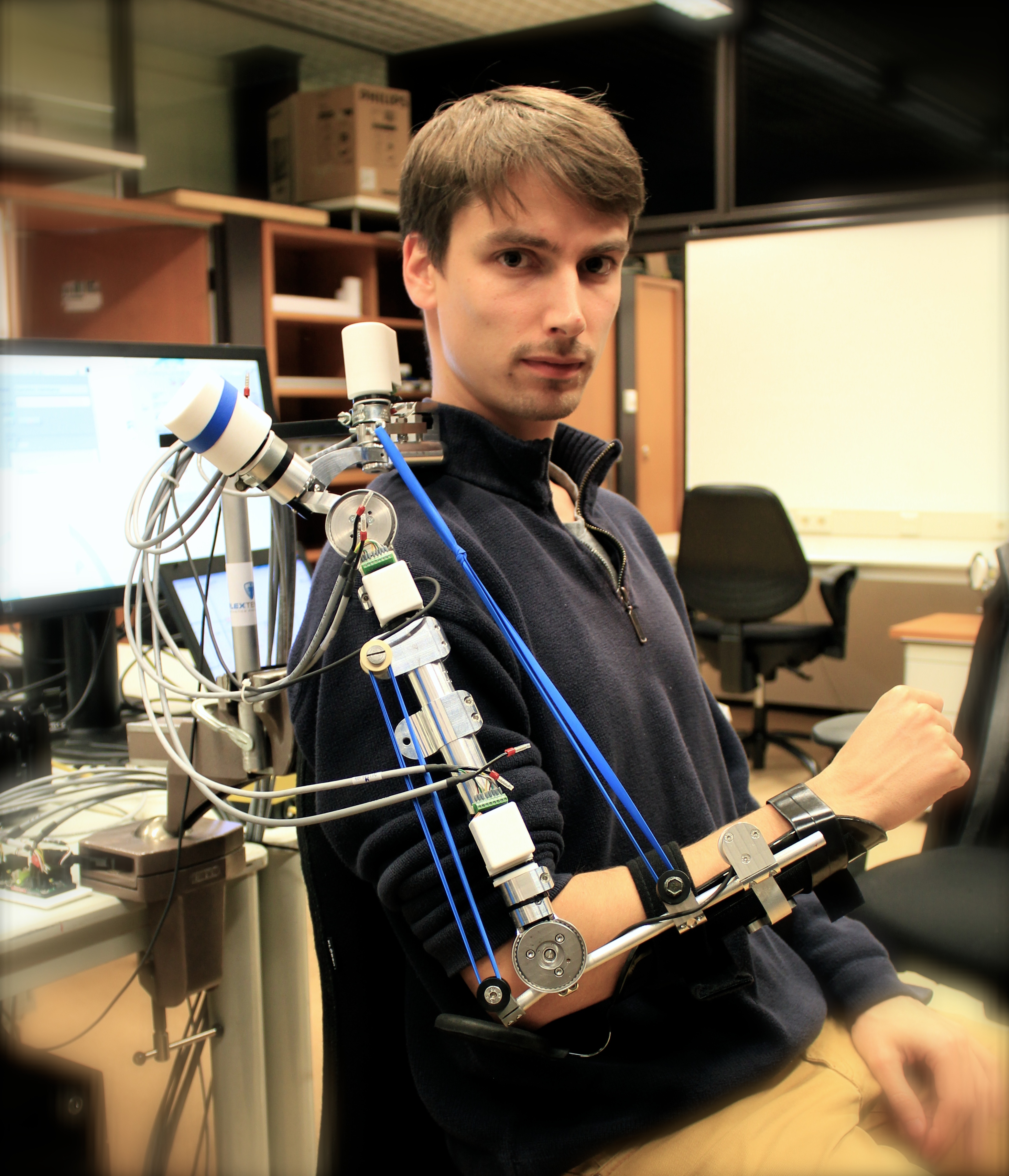 Researchers from the University of Twente’s MIRA research center, together with the VUmc, TU Delft and the Radboud umc, have developed the A-Gear: a robotic arm that can support the daily activities of people suffering the muscular disease Duchenne Muscular Dystrophy. They recently put the final touches to the first prototype for a discreet, body-connected support aid that can be worn under the clothing and that can support independent operation of the arm during important daily activities.

Duchenne Muscular Dystrophy
Duchenne Muscular Dystrophy occurs in approximately 1 in 5000 live born boys. The muscles of Duchenne Muscular Dystrophy patients become weaker during their life. As a result, boys with Duchenne lose the ability to use their arms until, eventually, they are unable to use them at all. Medicines can slow the progress of the disease and increase the life expectancy of boys with Duchenne, which means preserving the functionality of their arms becomes even more important. There are a few support aids that can recapture the loss of muscle function in the arms, but these support aids do not compensate for the entire loss of function and can result in stigmatization.

In order to assess their design, the researchers compared the arm functionality of boys with Duchenne with and without A-Gear arm support. “During the research, there were a number of participants who had been unable to independently move their arms for between three and five years and they were able to complete the tests set out in the tasks. The freedom of movement and the functionality of the arm increased when the subjects used the prototype. In addition, the movements required less energy,” adds Joan Lobo-Prat, researcher at the MIRA research center for Biomedical Technology and Technical Medicine.

Development of the Disease
The researchers not only looked into a technical solution, they also obtained more insight into the development of arm function in boys and men with Duchenne Muscular Dystrophy through the Duchenne Dynamic Arm Study (DDAS). By measuring the arm function of patients of different ages, they were able to obtain an impression of how the arm function changes over the course of the illness and accordingly, how to adjust the arm support over time.

Continuation
Although the results of the A-Gear project have provided new insights into the appearance of support aids such as these, much work is yet to be done in various areas. At the moment, a review is being carried out to work out what the next steps should be to convert the prototype into a product that can be used effectively.