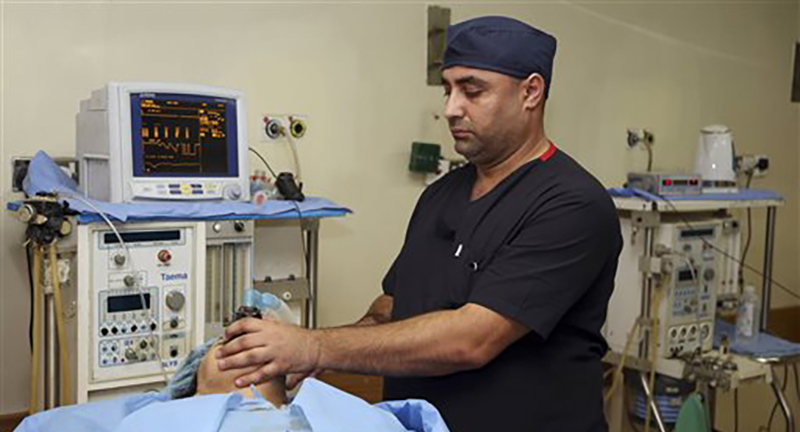 In this Sunday, Nov. 29, 2015, photo, anesthesiologist Bashar Taha works with his patient at a hospital in Baghdad. For nearly three months, Taha and his family lived in anxiety and fear of retaliation that could end in death. (Courtesy of the Associated Press)

For nearly three months, anesthesiologist Bashar Taha lived in fear of deadly retaliation. Taha, 38, was part of a team that performed plastic surgery on a female patient’s nose in a Baghdad hospital. The woman had surgery complications afterward and was sent to intensive care, where she died. An autopsy showed bacterial poisoning from the intensive care room caused her death.

But the family blamed Taha and the surgeon, demanding their respective tribes arbitrate the case and rule on compensation. Otherwise, the doctors would face lethal consequences, the family threatened.

As Iraq struggles to combat the Islamic State group, which has captured large swaths of territory and plunged the country into the worst political and security crisis since the withdrawal of U.S. troops in 2011, threats against doctors have increased. Research published in the Lancet medical journal estimates more than 2,000 doctors have been killed in Iraq since the 2003 U.S.-led invasion. Over the past year, doctors and other medical workers say they are increasingly facing harassment and assaults by disgruntled relatives of patients.

The phenomenon reflects the growing power of tribal rule in the face of Iraq’s weakening central government. Doctors are either turning down cases or seeking work abroad in increasing numbers, further crippling a health care system already plagued by corruption, mismanagement and shortages.

Taha, the anesthesiologist, had approached the Iraqi Doctors Syndicate and even clerics, but with little faith in Iraq’s dysfunctional justice system, they hinted he should work with tribal leaders. Eventually, he and the surgeon paid the family 50 million Iraqi dinars (about $41,000).

“We are living in a state of lawlessness, the government is barely able to function,” Taha told The Associated Press. “So we paid in order to save ourselves and our families, or at least to avoid being assaulted or insulted by an uneducated man in the street in front of others.”

The deputy head of the Iraqi Doctors Syndicate, Dr. Mahdi Jassim, said assaults occur “on a daily basis in almost all medical centers due to the lack of security nationwide.” He called for “swift action from the government to protect the doctors, otherwise we will all lose.”

Since the 2003 U.S.-led invasion that toppled Saddam Hussein, Iraq’s professional class has been targeted by militants trying to widen chaos or by gangs extorting the wealthy.

Since the 1990s — when the country reeled under harsh U.N. economic sanctions — about 11,000 doctors have left Iraq, the majority of them after 2003, Health Ministry spokesman Ahmed al-Rudaini said. The country’s medical centers are limping along with only 25 percent of the required staffing, he said.

Specific numbers for assaults, kidnappings and killings of medical staff are not available, but al-Rudaini said the issue has become a “phenomenon recently that forces a lot of doctors not to accept major surgeries with high risk or to seek refuge abroad, making it hard for the ministry to persuade those who are abroad to return.”

Jassim said every month about 70 to 80 doctors, mostly new graduates, apply to the Iraqi Doctors Syndicate for the documents that are needed to seek jobs outside Iraq.

Interior Ministry spokesman Brig. Gen. Saad Maan said a special committee has been established in coordination with the Health Ministry to follow up on the assaults. “We have increased the number of guards in health institutions and attackers will face tough measures,” he said.

Like many parts of the Arab world, tribal affiliations play a significant role in Iraqi society. Their influence was more muted before 2003 but has surged in many parts of Iraq due to the chaos and successive weak governments since Saddam’s toppling.

Many people now prefer to solve disputes — like theft, assaults and murder — through their tribes instead of going to authorities. Some disputes in the south this year turned into bloody clashes that lasted for days, paralyzing those areas as security forces stayed on the sidelines.

It’s not only ordinary citizens who rely on tribal justice. This year, at least two tribal sessions were held for lawmakers over statements they made against each other in the media.

Iraq’s top Shiite cleric, Grand Ayattollah Ali al-Sistani, last month blamed “the weak status of the law that gives opportunity to some to use their influence or tribal arbitration as a means to assault and blackmail others.”

In late September, 32-year-old Saddam al-Saiedi died a few days after having weight loss surgery in Iraq’s southern city of Basra. Autopsy results have not yet been released, but al-Saiedi’s tribe blamed the surgeon, who fled the city after the words “Wanted to be punished for death” were spray-painted on his home and clinic.

“The health situation in Basra is terrible. The doctors are greedy and care only about their pockets, while authorities do not monitor their work and do not punish the wrongdoers,” said al-Saiedi’s brother, Mohammed. “If all these things existed in Iraq, I would never rely on the tribe.”

He added: “If lawmakers are relying on their tribes to solve their issues, what should a normal citizen do?”

A Baghdad-based surgeon said his female patient died three months after weight loss surgery, prompting her tribe to demand compensation. He said they refused to wait for results of the autopsy and even threatened to kill him.

The surgeon, who spoke on condition of anonymity because he is still trying to resolve the dispute, said he complained to police, who didn’t treat his case seriously. Eventually, he asked his tribe to provide guards for his clinic and home.

“I’m not guilty, so I don’t want to solve it through tribes,” he said.

When the issue is finally resolved, the surgeon said he was planning to ask for an unpaid one-year vacation to seek other opportunities abroad. “I had ambition, but it is gone now.”