Apple is trying to turn its smartwatch from a niche gadget into a lifeline to better health by slowly evolving it into a medical device.

In its fourth incarnation, called the Series 4 and due out later this month, the Apple Watch will add features that allow it to take high-quality heart readings and detect falls. It’s part of Apple’s long-in-the-making strategy to give people a distinct reason to buy a wrist gadget that largely does things smartphones already do.

Since the Apple Watch launched in April 2015 , most people haven’t figured out why they need to buy one. Apple doesn’t release sales figures, but estimates from two analysts suggest the company shipped roughly 18 million of the gadgets in 2017. Apple sold almost twelve times as many iPhones — 216 million — that year. Apple shipped another 7.3 million during the first half of this year, according to Canalys Research, compared to more than 93 million iPhones.

Worldwide, about 48 million smartwatches are expected to be sold this year compared to nearly 1.9 billion phones, according to the research firm Gartner.

Apple CEO Tim Cook has long aimed to emphasize the health- and fitness-tracking abilities of the smartwatch. The original version featured a heart-rate sensor that fed data into fitness and workout apps so they could suggest new goals and offer digital “rewards” for fitness accomplishments.

Two years later, Apple called its watch “the ultimate device for a healthy life,” emphasizing water resistance for swimmers and built-in GPS for tracking runs or cycling workouts. In February, the company announced that the watch would track skiing and snowboarding runs , including data on speed and vertical descent.

The latest Apple Watch version unveiled Wednesday is pushing the health envelope even further — in particular by taking electrocardiograms, or EKGs, on the device, a feature given clearance by the U.S. Food and Drug Administration, Apple said. The watch will also watch for irregular heartbeats and can detect when the wearer has fallen, the company said. 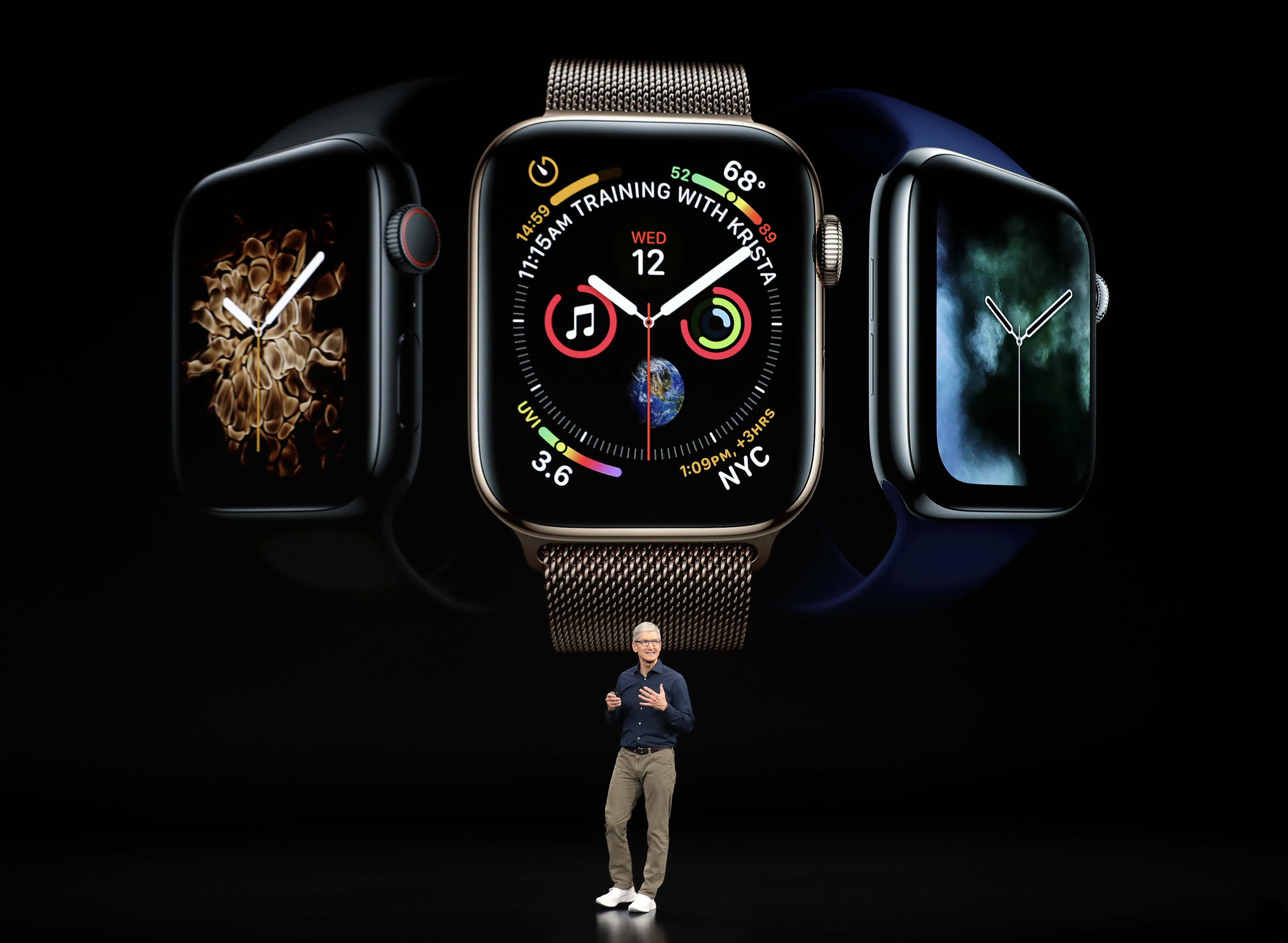 EKGs are important tests of heart health that typically require a doctor visit. The feature gained an onstage endorsement from Ivor Benjamin, a cardiologist who heads the American Heart Association, who said such real-time data would change the way doctors work.

“This is enormous,” Gartner analyst Tuong Nguyen said of the Apple Watch’s EKG feature. It could turn smartwatches “from something people buy for prestige into something they buy for more practical reasons,” he said.

It could also lead some health insurance plans to subsidize the cost of an Apple Watch, Nguyen said. That would help defray the $400 starting price for a device that still requires a companion iPhone that can now cost more than $1,000.

The watch will use new sensors on the back and on the watch dial. A new app will say whether each reading is normal or shows signs of atrial fibrillation. Atrial fibrillation is an irregular heart rate that increases the risk of heart complications, such as stroke and heart failure.

Apple says the heart data can be shared with doctors through a PDF file, though it’s not yet clear how ready doctors are to receive a possible flood of new EKG data from patients — nor how useful they will find the electronic files.

This new features will be available to U.S. customers later this year, Apple said — an indication that it may not be ready for launch.

Fall detection could also be significant, especially for elderly users. The new Apple Watch claims to be able to tell the difference between and trip and a fall — and when the latter occurs, it will suggest calling 911. If it receives no response within a minute, the watch will automatically place an emergency call and message friends and family designated as emergency contacts.

Only certain Apple Watch models support cellular calls, but those that don’t can still make emergency calls when near a paired iPhone or Wi-Fi service.

Apple says it monitored some 2,500 people — measuring how they fell off ladders, missed a step while walking or got their legs caught in their pants while getting dressed. It used that data to separate real falls from other heavy wrist movements, such as clapping and hammering.

The feature will turn on automatically for users 65 and over; younger people can activate it in the settings. “I can see kids buying one for their parents and grandparents,” said analyst Patrick Moorhead of Moor Insights.

But the Apple Watch still lacks one feature found in rival wrist gadgets: the ability to analyze sleep quality. Battery life in the new watch remains at 18 hours, meaning it needs a daily — or nightly — recharge.