Heart tissue can be imaged in real-time during keyhole procedures using a new optical ultrasound needle developed by researchers at UCL and Queen Mary University of London (QMUL).

The revolutionary technology has been successfully used for minimally invasive heart surgery in pigs, giving an unprecedented, high-resolution view of soft tissues up to 2.5 cm in front of the instrument, inside the body.

For the study, published in Light: Science & Applications, the team of surgeons, engineers, physicists, and material chemists designed and built the optical ultrasound technology to fit into existing single-use medical devices, such as a needle.

“The optical ultrasound needle is perfect for procedures where there is a small tissue target that is hard to see during keyhole surgery using current methods and missing it could have disastrous consequences,” says Dr. Malcolm Finlay, study co-lead and consultant cardiologist at QMUL and Barts Heart Centre.

“We now have real-time imaging that allows us to differentiate between tissues at a remarkable depth, helping to guide the highest risk moments of these procedures. This will reduce the chances of complications occurring during routine but skilled procedures such as ablation procedures in the heart. The technology has been designed to be completely compatible with MRI and other current methods, so it could also be used during brain or fetal surgery, or with guiding epidural needles.” 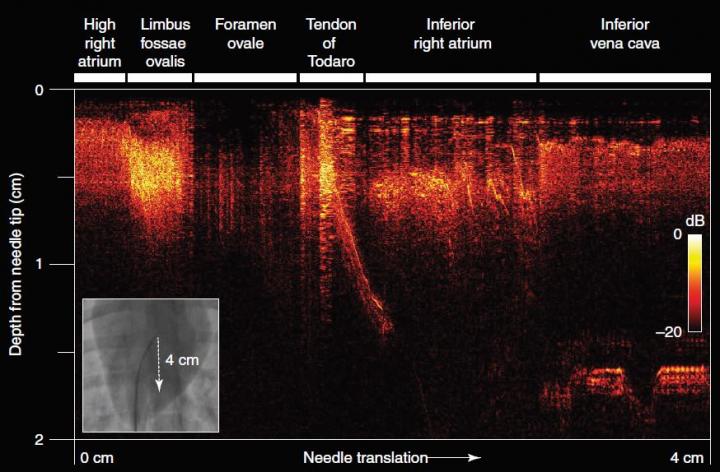 Two-dimensional all-optical ultrasound imaging (B-Mode) acquired during the manual translation of the needle tip across a distance of 4 cm. As the needle tip progressed from the high right atrium to the inferior vena cava, the thin foramen ovale manifested as a hypoechoic region between the thick limbus fossae ovalis and the tendon of Todaro (with a diagonal artifact from the ICE catheter and sheath). X-ray fluoroscopic imaging was acquired concurrently (inset). (Image credit: Finlay et al.)

The team developed the all-optical ultrasound imaging technology for use in a clinical setting over four years. They made sure it was sensitive enough to image centimetre-scale depths of tissues when moving; it fitted into the existing clinical workflow and worked inside the body.

“This is the first demonstration of all-optical ultrasound imaging in a clinically realistic environment. Using inexpensive optical fibres, we have been able to achieve high resolution imaging using needle tips under 1 mm. We now hope to replicate this success across a number of other clinical applications where minimally invasive surgical techniques are being used,” explains study co-lead, Dr. Adrien Desjardins (Wellcome EPSRC Centre for Interventional and Surgical Sciences at UCL).

The technology uses a miniature optical fibre encased within a customised clinical needle to deliver a brief pulse of light which generates ultrasonic pulses. Reflections of these ultrasonic pulses from tissue are detected by a sensor on a second optical fibre, giving real-time ultrasound imaging to guide surgery.

One of the key innovations was the development of a black flexible material that included a mesh of carbon nanotubes enclosed within clinical grade silicone precisely applied to an optical fibre. The carbon nanotubes absorb pulsed laser light, and this absorption leads to an ultrasound wave via the photoacoustic effect.

A second innovation was the development of highly sensitive optical fibre sensors based on polymer optical microresonators for detecting the ultrasound waves. This work was undertaken in a related UCL study led by Dr. James Guggenheim (UCL Medical Physics & Biomedical Engineering) and recently published in Nature Photonics.

“The whole process happens extremely quickly, giving an unprecedented real-time view of soft tissue. It provides doctors with a live image with a resolution of 64 microns, which is the equivalent of only nine red blood cells, and its fantastic sensitivity allows us to readily differentiate soft tissues,” says study co-author, Dr Richard Colchester (UCL Medical Physics & Biomedical Engineering).