From stents to TAVR, Stanton Rowe has built a medtech legacy out of accomplishing the seemingly impossible. Here are three lessons from his career. 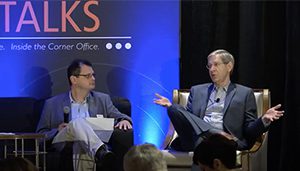 Listening to him speak at DeviceTalks West last month, it was obvious that his achievements come from being more than just a by-the-numbers businessman. Rowe, in fact, dared to do the impossible – an instinct he may have honed growing up in Huntsville, Ala., when it was the center of U.S. rocket development during the space race. Rowe’s father worked for the federal space agency as an engineer, he told Medical Design & Outsourcing Executive Editor Brad Perriello.

“The impossible is the most fun you can have in medical device development. Just go do the impossible. … Those are the things that really impact patients, too,” Rowe said during the event in Costa Mesa, Calif.

“We’re not just replacing these valves. In the tricuspid, in mitral, we’re repairing them,” Rowe said.

“Doing repair systems under fluoroscopic guidance and echo guidance is the next generation of these therapies, and it’s something to pilot,” Rowe said. “Their development is fraught with the same kind of challenges we had before, which makes it just a ton of fun.”

Here are three lessons from Rowe’s career that every medical device developer could take to heart:

1. Customer input only goes so far

During the early years of the last decade, Rowe founded Percutaneous Valve Technologies with Drs. Alain Cribier and Martin Leon. Back then, Rowe recalled, cardiothoracic surgeons didn’t have a single positive thing to say about TAVR. Surgeons, after all, do surgery. But what about the patients for whom invasive surgery was not an option?

“The multibillion-dollar simple question that no one asked was, ‘Why would I send a non-surgical patient to a surgeon?’” Rowe said. “If you’re doing something that is bold and decisive, you’re probably going to experience some skepticism.

“The idea that you go out and garner input from your customers is a fundamental and brilliant idea. But there are points in time where customers …  have no idea of what they really want,” he explained.

“It can be lonely when you’re doing something really disruptive.”

2. You need answers to the questions

During the early days of TAVR, Rowe received a lot of technical feedback from medical experts about why it wasn’t going to work. They said crimping down a heart valve, for example, would destroy tissue; they said the procedure would leave the diseased valve in place instead of cutting it out, so the transcatheter valve would deploy into diseased tissue; they said calcified material from the stenotic valve would fragment, increasing the risk of stroke.

How did Rowe answer that? It turned out there was already data on hundreds of people who had received aortic balloon angioplasty and the stroke rate was about the same as surgery. Also, the calcium was encapsulated in tissues on the outer surface of the diseased valve, while the TAVR procedure would take place on the inner surface of the valve.

For any groundbreaking achievement, Rowe noted, there’s a “list of things that you have to have good answers for.”

“Think of this as your job.”

3. It has to be about more than money

Percutaneous Valve Technologies’ Series B round was led by Medtronic and Boston Scientific, which had seats on PVT’s board along with Johnson & Johnson, which licensed some technology to PVT. But Rowe eventually sold to Edwards in 2004, despite the involvement of a trio of huge medtech strategics.

That’s because Rowe saw that it was about more than about money with Edwards.

“I did think this technology had its best chance for success at Edwards, because that was core to their business,” he explained. “Edwards was the world’s leading heart valve company. If anybody could add technology to what we had already done, it was Edwards.”

Rowe also thought it was good that Edwards had to borrow money for the purchase, because it demonstrated commitment.

“You spend years developing something … it becomes very personal. And so you desperately want to see it succeed,” Rowe said.

Rowe also admitted that he made a “really stupid business decision” in 2002 when it came to going ahead with what turned out to be the first successful TAVR procedure on a person, which Cribier performed at Hospital Charles Nicolle, at the University of Rouen in France.

The patient was a dying 57-year-old man who was in cardiogenic shock, with an ejection fraction of only 10%. He was not even close to being a candidate for open heart surgery. Why should PVT provide TAVR tech to help him?

“We’re going to go try to save his life. I was concerned he was going to die, and then the French regulatory authorities are going to crucify us for killing him,” Rowe said.

And yet there was something else even more important that Rowe had to consider.

“Why we were working the way we were? We had a reason for this development that was so fundamental to what we were doing. And I thought at the end of the day, ‘My God, this is why we created this technology. It’s to save even one life. And this is our first opportunity.’” 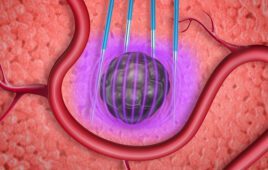